"The ring of fire" will be visible to some people in Greenland, northern Russia and Canada 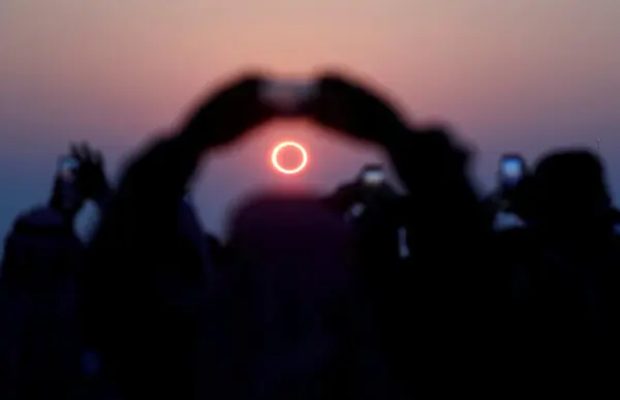 The world is about to witness the first solar eclipse of 2021 today as the ‘ring of fire’ will light up the sky on Thursday afternoon.

However, the solar eclipse will not be visible in Pakistan.

The eclipse would be visible in Russia, Greenland, Northern Canada, North Asia, Europe, and the United States.

While, other countries in the Northern Hemisphere, including the United Kingdom and Ireland, will be able to see a partial eclipse,

A solar eclipse occurs when the moon crosses between the sun and the Earth, which blocks a portion of the sun’s ray.

The moon will partially block out the sun this Thursday to create a “ring of fire” solar eclipse.

Those who want to watch this solar eclipse event can catch up the live  stream being broadcast by NASA:

tweet
Share on FacebookShare on TwitterShare on PinterestShare on Reddit
Saman SiddiquiJune 10, 2021
the authorSaman Siddiqui
Saman Siddiqui, A freelance journalist with a Master’s Degree in Mass Communication and MS in Peace and Conflict Studies. Associated with the media industry since 2006. Experience in various capacities including Program Host, Researcher, News Producer, Documentary Making, Voice Over, Content Writing Copy Editing, and Blogging, and currently associated with OyeYeah since 2018, working as an Editor.
All posts bySaman Siddiqui