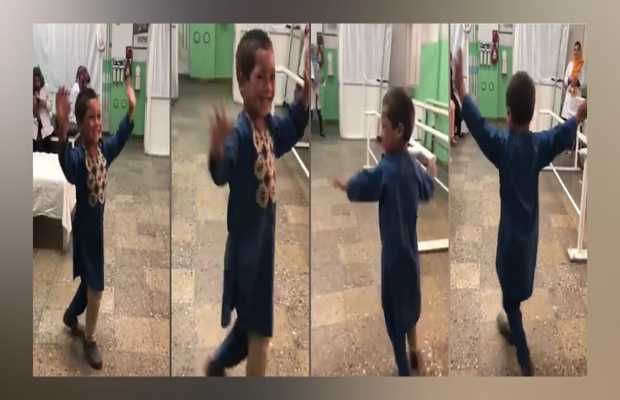 An Afghan boy dancing jubilantly after receiving a prosthetic leg is winning millions of hearts over the internet.

The 5-year-old boy was identified as Ahmad Sayed Rahman, a resident of Logar province, had lost his leg during a landmine explosion.

Watching this video will definitely make up your day, as many try to seek for the true definition of happiness.

Afghanistan is the world’s most heavily mined country with an estimate of 100,000 landmines.

Over 31,000 casualties have been recorded since 1979 in the war affected Afghanistan, with the largest number of victims are children.

This video has captured the attention of millions of people throughout the world:

Starting the day with this. My heart is smiling. Ufff ❤️ https://t.co/0wLsF1uCNm

This is one of the most powerful things you will see on Twitter today. This young boy’s attitude epitomizes the spirit of the Afghan https://t.co/3EUCPaATwT

Cute and happy #Afghan boy dances at the @ICRC_af orthopaedics center after he got a prosthetic leg. He was a victim of a landmine.

Ahmad received artificial limb in @ICRC_af Orthopedic center, he shows his emotion with dance after getting limbs. He come from Logar and lost his leg in a landmine. This is how his life changed and made him smile. pic.twitter.com/Sg7jJbUD2V

Vow,and sometimes we forget the real problems of real people dealing with them on a daily basis. Nothing compares to this happiness and suffering too. So happy for the young man. Bless him and may he stay happy forever.