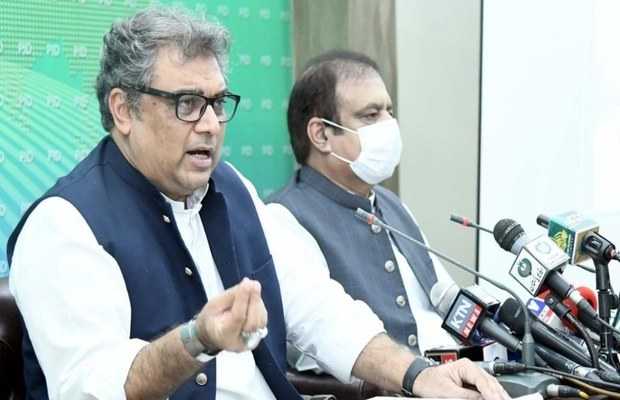 Minister for Shipping and Maritime Affairs Ali Haider Zaidi was addressing a press conference in Islamabad, alongside Information Minister Shibli Faraz, where he made a passionate appeal to Chief Justice of Pakistan Gulzar Ahmed to take suo motu notice of the Uzair Baloch JIT report released by the Sindh government a day earlier.

Ali Zaidi said that “Six people, including Faryal Talpur, Abdul Qadir Patel, and Sharjeel Memon, were named in the original report, the one that I have a copy of”.

He claimed that there was a problem with signatures in some reports as there were six members of the JIT but reports had only four signatures.

“There is a clear difference between these two reports”, he said

Further added that “For instance, the report released for the public says that In 2011, the accused ordered the murder of Jalil, the brother of Razzak Commando, and instructed Javed Langra and Baba Ladla to dispose of the body at an undisclosed location”.

“The other report, which has signatures of everyone, says that “Abdul Qadir Patel of PPP tasked the accused of killing Jalil. In 2011, Langra and Ladla kidnapped him and informed Baloch who in turn told Patel of the kidnapping, and then he directed them to kill him,” he claimed.

“Uzair Baloch had said the same thing in his confession statement in the court. However, the JIT report now says that Baloch committed many crimes and murders but it doesn’t say who ordered these killings.

One report clearly mentions that Baloch had a strong political affiliation with the PPP, but the report that was made public does not say it”, maintained Ali Zaidi.

“The PPP leaders have repeatedly claimed that Zulfikar Mirza was working in close coordination with Baloch. Mirza left in 2012 but the Sindh government issued a notification the next year taking back the head money announced for Baloch”, he added.

The PTI leader also showed a video in which Uzair Baloch was spotted with different PPP leaders such as Talpur.

“I want the chief justice to take suo motu on this and the court should call all members of the investigating team and ask if it is their signatures on the released reports or not,” he added.

“I will approach the Supreme Court myself is nothing is done about this.”