All eyes set on the Supreme Court of Pakistan 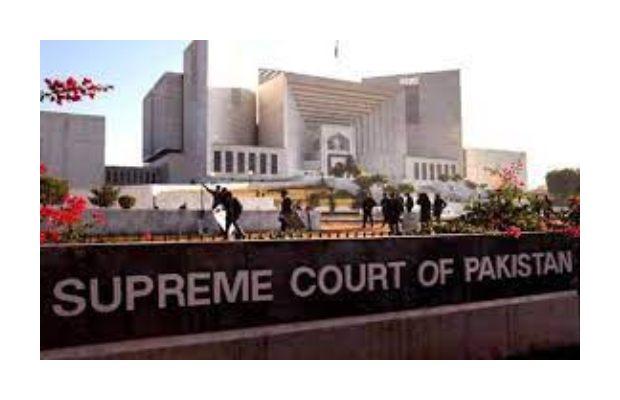 All eyes are set on the Supreme Court of Pakistan on Monday as a five-member larger bench hears suo motu on the constitutional crisis in the country.

During Monday’s hearing, Justice Muneeb Akhtar of the Supreme Court of Pakistan said that the speaker can reject a resolution as per the Assembly rules.

Details of Monday’s hearing at the SC:

PPP’s counsel Farooq H Naek requested to the court to form a full-court bench to hear the case.

“The court should form a full-court bench for [this] important constitutional matter,” Naek said.

CJP Bandial responding to Naek’s request, remarked that the bench would wrap up if Naek says he doesn’t have confidence in anyone.

CJP  inquired if Naek would like to share which of the constitutional questions need the formation of a full-court bench.

“Looking into the constitutional questions is the court’s job. You tell […] what is the basis of your case.

The court will let you know if a full-court bench is needed over the constitutional questions in the case, the CJP added.

Naek in his starting arguments referred to Article 54(3) and said that the National Assembly session is supposed to be convened within 14 days after a motion is submitted.

“Tell [me] if the speaker did right or wrong,” the judge asked Naek.

“Wouldn’t the resolution be dismissed if there are 100 members and of them 50 are in its favour and 25 are against it,” Justice Akhtar said.

Justice Ahsan remarked that “no-confidence motion is not valid until the leave is not granted.”

Naek argued that the speaker had permitted presenting the resolution of no-trust.

CJP Bandial inquired what does it mean to grant leave.

The court inquired who allows presenting the resolution, the speaker or the House.

Naek responded to the inquiry saying that the House allows presenting the resolution instead of the speaker.

“Does the speaker have the authority to disallow presenting the resolution and what happens if the speaker doesn’t allow it,” Justice Akhtar questioned.

CJP Bandial inquired if April 3 was not the fixed for debate on the no-confidence motion.

“How could a date be fixed for direct voting without holding debate on the no-trust motion,” CJP asked, adding that debate must be done for three days before going towards voting as per the rules.

Naek informed the court that the speaker did not allow debating on the motion despite PPP Chairman Bilawal Bhutto-Zardari’s request.

“Not allowing debate is a procedural defect,” Justice Ahsan remarked at Naek’s response.

Discussing Sunday’s session, the court inquired under which rule did the speaker give the ruling?

Naek told the court that the speaker gives rulings under Rule 28.

Justice Akhtar remarked that only the speaker can give and take back the ruling under the rule mentioned by Naek.

“The speaker can give a ruling in the House or in his office,” the judge said.

He further stated that the speaker gives the deputy speaker the authority in written but the latter can only preside over a meeting of the Assembly.

CJP Bandial during the Monday’s hearing, directed Naek to argue how the deputy speaker’s ruling is illegitimate.

Naek requested the court to wrap up the case and reserve the verdict today.

To which the CJP remarked that the court has to hear other respondents as well.

The court at this point has adjourned the hearing till 12pm tomorrow (Tuesaday), April 5.

Chief Justice of Pakistan (CJP) Umar Ata Bandial on Sunday took suo motu notice of the situation arising out of political mayhem in Islamabad following rejected of the no-confidence motion against the prime minister and the dissolution of the National Assembly on Imran Khan’s advice.

tweet
Share on FacebookShare on TwitterShare on PinterestShare on Reddit
Saman SiddiquiApril 4, 2022
the authorSaman Siddiqui
Saman Siddiqui, A freelance journalist with a Master’s Degree in Mass Communication and MS in Peace and Conflict Studies. Associated with the media industry since 2006. Experience in various capacities including Program Host, Researcher, News Producer, Documentary Making, Voice Over, Content Writing Copy Editing, and Blogging, and currently associated with OyeYeah since 2018, working as an Editor.
All posts bySaman Siddiqui