The organisers shared both videos on the social media platform to show how the words of the slogans raised at the march were changed. 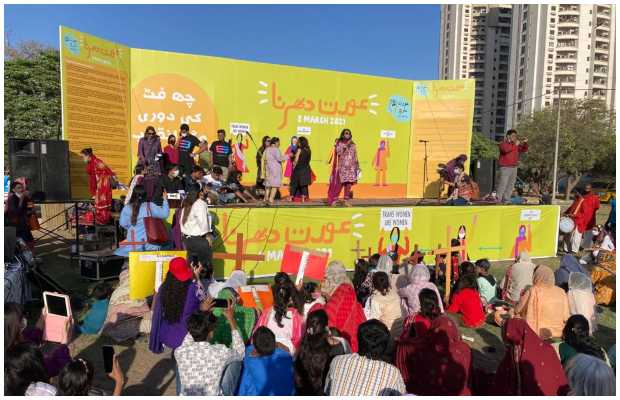 This year’s Aurat March was struck with blasphemy accusations after a manipulated video started doing rounds on social media.

Social media is currently in an uproar and the organizers and supporters of the Aurat March Karachi are demanding an apology after a video clip from the March 8 demonstration started doing rounds on various social media platforms.

The video clip had been tempered that falsely show participants of the march raising blasphemous slogans.

In this regard, an official statement was shared by the march’s organizers to clarify the matter and shared both the original and doctored video clips.

According to the forum, the fake videos were shared by some journalists with massive Twitter followings and led to death threats for the organisers.

“The Aurat March faces severe backlash every year. Our videos and posters are targeted and manipulated, spreading misinformation and maligning the March. This year, one of our videos was doctored and heinous allegations are being placed on us,” the tweet said.

Here’s is the original slogan, here is our real voice 🗣

Female journalists and activists have shared their demands ‘Apologize To Aurat March‘ in a signed document after the recent episode of allegations on Aurat March.

Google Document available online that contains both the statement and signatures of over 260 journalists, activists, supporters.

“These tweets with false information were shared by Ovais Mangalwala, Ansar Abbasi, and Orya Maqbool Jan,” stated the document.

Whoever has maliciously or carelessly publicised the doctored video against the #AuratMarch2021 organisers have put LIVES at risk. There should be nothing less than an unqualified public apology. Doctoring a video is a punishable offence under the law. #jhootbandkaro https://t.co/cR4RgtIZ53

The hashtag #ApologizeToAuratMarch is the top trending topic on social media today.  Several people have also taken to Twitter to condemn the doctored videos and demanding an inquiry into the incident along with an apology.

Minister of Science and Technology Fawad Chaudhry has asked for an inquiry against those who committed the ‘grave offense’ of editing a fake Aurat March video.

Those who edited the video have committed a grave offence FIA should proceed against those responsible a trail will help agencies to trace who originated the fake video…. https://t.co/KbNFSIBbWR

Bakhtawar Bhutto Zardari also condemned the act. She called it a “purposeful campaign” that will “not deter this beautiful and necessary movement”.

Absolutely condemn the doctored videos of #AuratMarch done to incite hatred & endanger lives of more women. Know that it is a purposeful campaign & this pathetic, illegal (also criminal) intent to harm will not deter this beautiful & necessary movement #StopHateAgainstAuratMarch

Meanwhile, female journalists and supporters are in an uproar demanding a ‘public apology’ over the doctorated video clip.

A campaign of disinformation was launched against Aurat March and its organisers to silence them. We want accountability for journalists who shared disinformation without fact checking! #ApologizeToAuratMarch

It’s sick how small men with their negative minds R spreading fake news against Aurat march.When they find nothing they use religion 3 intimidate voices of https://t.co/bVFYw4Cm0x’s an age old trick 2 suppress women but it won’t work,there is no going back.#ApologizeToAuratMarch

Please watch this WDF explainer video dispelling the accusations that the French flag was being waved at Aurat March when the flag in question was the WDF flag. Watch and share! #apologizetoauratmarch pic.twitter.com/csvx4xsGgS

The malicious campaign against Aurat March and Aurat Azaadi March has caused irrepairable harm to individuals and the movement. We demand that all those part of this disinformation campaign #ApologizeToAuratMarch NOW!