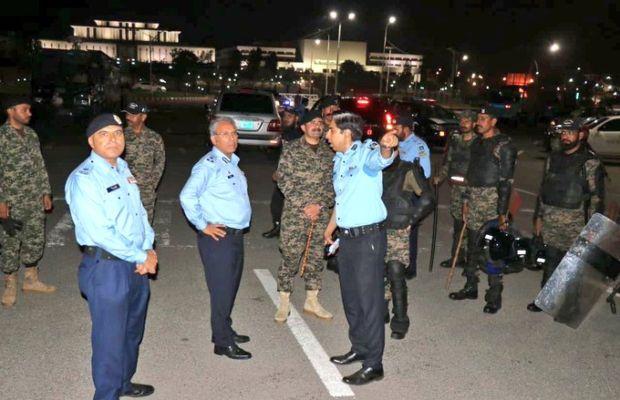 Army has been deployed in the Red Zone  Islamabad under Article 245!

As the situation turns chaotic in Islamabad, the federal government has summoned the army to maintain a law and order situation.

The troops will be deployed on the security of all government buildings including the Supreme Court, Parliament House, Prime Minister House, Presidency, Pakistan Secretariat, and Diplomatic enclaves.

The government, in a notification, said that the army was summoned to control the situation under article 245 of the Constitution.

The Federal Government is pleased to authorize deployment of sufficient strength of troops of Pakistan Army in Red Zone under Article 245. pic.twitter.com/85Nex2xama

Islamabad Police also issued a warning to the PTI  protesters and asked them to refrain from entering the Red Zone.

“Entry into the Red Zone will not be tolerated. All protesters and their leaders are requested to refrain from entering the said area in compliance with the orders of the court,” the Islamabad Police notified.

The situation has turned chaotic in the federal capital after PTI Chairman Imran Khan and his convoy entered Islamabad and started marching towards the city’s D-Chowk.

It’s been the whole night as protesters kept clashing with the police entering the Red Zone near D-Chowk.

Imran Khan at Hasan Abdal addressed his workers as the PTI caravan was on the way to the federal capital, and said that as soon as the police would see him reaching D-Chowk, it too would realize that “we are here for jihad, not politics.”

“We will not leave D-Chowk until the government announces a date for the elections in the month of June,” PTI Chairman Khan said.