He has promised to travel to Pakistan and highlight the country’s extreme climate vulnerability. 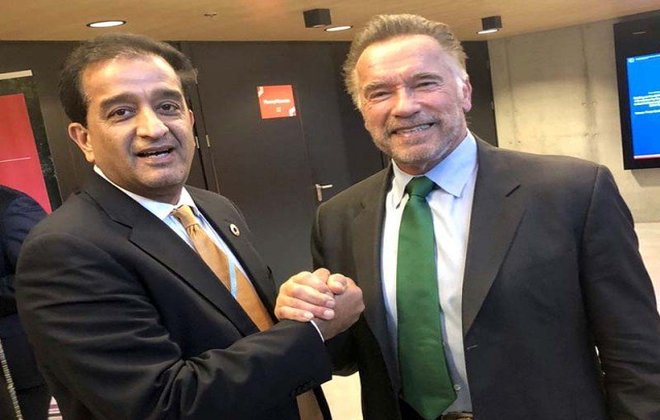 Hollywood superstar and former California Governor Arnold Schwarzenegger on Monday has promised to visit Pakistan, according to a tweet by the Prime Minister’s Adviser for Climate Change Malik Amin Aslam.

They met at the ongoing 24th Conference of the Parties (COP24) of the UN Framework Convention on Climate Change being held in Poland.

Mr. adviser took to social media posting a photo with Arnold sharing the news that Hollywood’s super star has promised to visit Pakistan and highlight the country’s extreme climate vulnerability.

Malik Amin Aslam is representing Pakistan at the 24th Conference of the Parties (COP24) of the UN Framework Convention on Climate Change being held in Poland.

Hearing the news, Arnold’s fans in Pakistan are delighted and are waiting for more details about his visit.

Hope to see him soon, let the world know more about us, our environment and the measures we, as a nation, are taking.

A legend when he was playing, a successful Governor and now helping humanity. Wish you will come to Pakistan….Welcome Sir.!

Climate change is a serious issue faced globally and also  affecting Pakistan. This meeting is being regarded as the most important gathering on Climate Change since the Paris Agreement was signed.

.@UN Chief @antonioguterres at #COP24 in Katowice: "We are in deep trouble with #ClimateChange This meeting is the most important gathering on #ClimateChange since the #ParisAgreement was signed. It is hard to overstate the urgency of our situation." #Talanoa4Ambition pic.twitter.com/kZvDdIKRQW

Sir David Attenborough, the icon of nature documentaries, has also addressed the world leaders on climate change: ‘The world is in your hands.’

Sir David Attenborough, the icon of nature documentaries, addresses world leaders on climate change: 'The world is in your hands.'

He also said that we’re facing a man-made disaster on a global scale.