Around 3,000 Pakistanis stranded in war-hit Ukraine safely evacuated to Poland

Some 500 to 600 were left behind and the embassy is in the process of safely evacuating them. 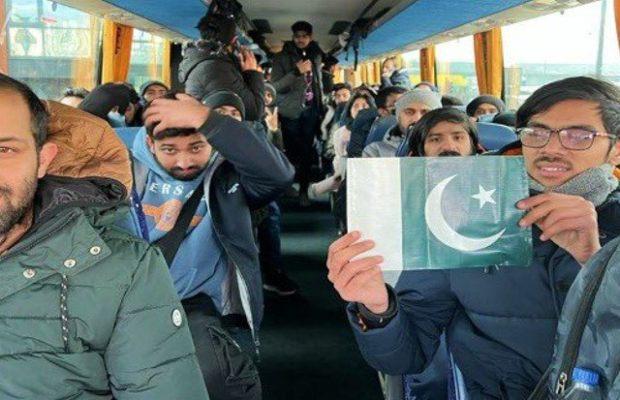 Around 3000 Pakistani students and families stranded in war-hit Ukraine have been safely evacuated to Poland.

The embassy in Ukraine has arranged special transport to move the students and families to the Polish border.

Pakistan’s Ambassador informed on Saturday that at least 62 Pakistani citizens, including 21 family members of the embassy staff, had been evacuated.

“All Pakistanis are safe and we are trying to guide them under the difficult situation,” Khokhar said, citing the closure of flights, banking systems, and non-availability of transport and fuel.

Dr. Noel Israel Khokhar has shared the update in a  voice message on his Twitter handle, said that there were about 3,000 students in Ukraine and the bulk of them had been safely evacuated.

He said some 500 to 600 were left behind and the embassy is in the process of safely evacuating them.

➖ They will be received by Embassy personnel and transferred to the nearest border crossing point. pic.twitter.com/ofO9QmfvCG

The Embassy of Pakistan Ukraine has received23more Pakistani students at Lviv Facilitation Desk,coming from different cities of Ukraine including Kyiv.They are set to be transferred to the Polish border through transportation arranged by the Embassy@SMQureshiPTI@ForeignOfficePk pic.twitter.com/zH5g9Xj2EV

104 Pakistani students were to arrive via train from Kharkiv by noon, while 20 students were being evacuated from Ukraine’s capital, Kyiv on a bus arranged by Pakistan’s embassy.

tweet
Share on FacebookShare on TwitterShare on PinterestShare on Reddit
Saman SiddiquiFebruary 26, 2022
the authorSaman Siddiqui
Saman Siddiqui, A freelance journalist with a Master’s Degree in Mass Communication and MS in Peace and Conflict Studies. Associated with the media industry since 2006. Experience in various capacities including Program Host, Researcher, News Producer, Documentary Making, Voice Over, Content Writing Copy Editing, and Blogging, and currently associated with OyeYeah since 2018, working as an Editor.
All posts bySaman Siddiqui