Ayodhya Verdict: Temple to be constructed on disputed land, 5 acres of different land allotted for Mosque

The Bench held that the destruction of the Mosque was against the rule of law. 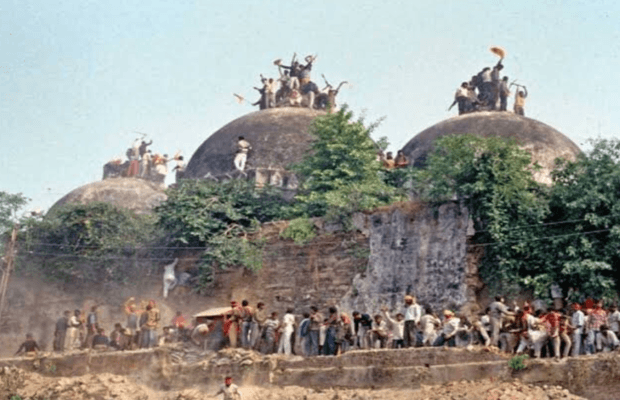 Indian Supreme Court on Saturday announced the delayed Ayodhya Verdict, clearing the way for a Hindu temple to be built at the disputed holy site.

The Supreme Court gave the ruling the site in Ayodhya in northern India, where Hindu mobs destroyed a 460-year-old Babri Mosque in 1992, must be handed over to a trust to oversee the construction of a Hindu temple, subject to conditions.

And that different land will be allotted to the Muslims for construction of the Mosque.

The verdict was given by a five-judge Constitution Bench headed by Chief Justice of India Ranjan Gogoi and comprising Justices SA Bobde, DY Chandrachud, Ashok Bhushan and S Abdul Nazeer.

“This Court set up under the Constitutional scheme should defer from interfering with the faith and belief of worshippers. Secularism is a basic feature of the Constitution”, at the outset, the bench observed.

The Bench held that the Ram Janmabhoomi (birthplace of Lord Ram) was not a juristic person.

It was further noted that there was evidence from the Archaeological Society of India (ASI) report to conclude that the Babri Masjid not constructed on vacant land. There was a structure underlying the disputed structure, which was not an Islamic structure.

Furthermore, the Bench noted that the finding on the question of the title cannot be based only on the expert reports. The title to the land should be decided based on settled legal principles.

It went on to hold that the possession as asserted by Muslims cannot meet the threshold of adverse possession.

Importantly, the Bench held that the destruction of the Mosque was against the rule of law.

Furthermore, there was another finding of the Court declared that there was clear evidence to show that Hindus worshipped in the outer courtyard of the disputed site. As regards the inner courtyard, there was no evidence by Muslims to show exclusive possession by them prior to 1857, the Bench noted.

“Muslims should not be deprived of a structure; they will get an alternative site for the mosque,” the court ruled.

The ruling further said the Indian government will formulate a scheme in three months to set up a board of trustees for the construction of the temple at the disputed structure.

“Court should preserve balance,” Chief Justice of India Ranjan Gogoi said while reading out the judgment.

tweet
Share on FacebookShare on TwitterShare on PinterestShare on Reddit
Saman SiddiquiNovember 9, 2019
the authorSaman Siddiqui
Saman Siddiqui, A freelance journalist with a Master’s Degree in Mass Communication and MS in Peace and Conflict Studies. Associated with the media industry since 2006. Experience in various capacities including Program Host, Researcher, News Producer, Documentary Making, Voice Over, Content Writing Copy Editing, and Blogging, and currently associated with OyeYeah since 2018, working as an Editor.
All posts bySaman Siddiqui