The march set out on Sunday afternoon from Karachi 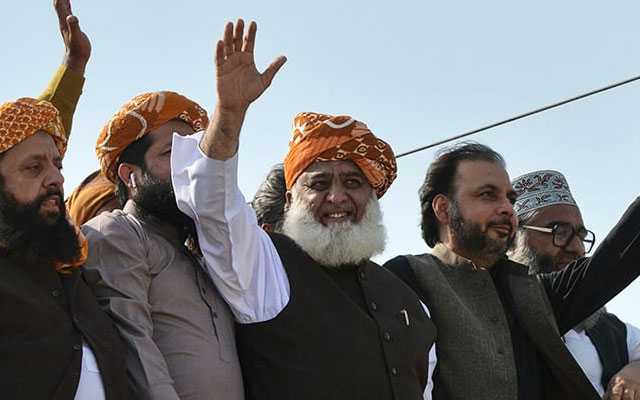 Jamiat Ulema-e-Islam-Fazl (JUI-F) Ameer Maulana Fazlur Rehman on Monday joined the anti-government protest, Azadi March from Larkana, as the resumed their journey from Sukkur on the second day.

Azadi March set out on Sunday afternoon from Karachi. It began after the address by JUI-F at Sohrab Goth to express solidarity with the people of Indian occupied Kashmir.

Fazlur Rehman, in his address at the march said, they will not deter as the ‘war has begun’ and the only purpose of this war is to strengthen democracy in the country.

He said that they are combating a political war and there exists a danger to the country’s constitution.

The thousands of people, including seminary students who are participating in the march and  came from across the country will gather near Tarnol before entering Islamabad on October 31.

Earlier on Saturday, the government and opposition reached a deal whereby the terms and conditions of the anti-government ‘Azadi March’ were agreed between them. The agreement announced by JUI-F leader Akram Durrani clarified that the participants of the march “will not enter the Red Zone” of Islamabad.