The participants of the march will not enter D-Chowk. 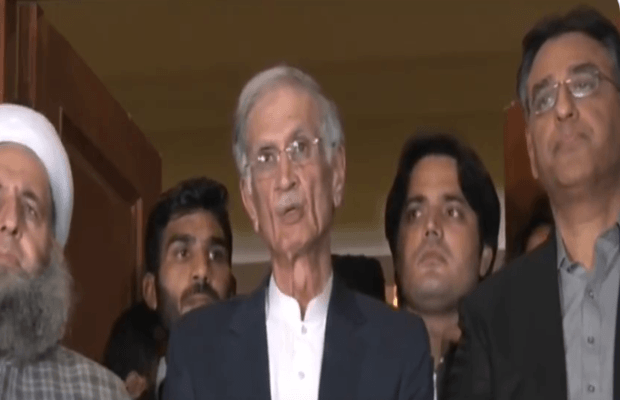 Defence Minister Pervez Khattak said on Saturday that an agreement had been reached between the government and Rahbar Committee according to which participants of the march will not enter D-Chowk.

Pervez Khattak was conducting a press conference with members of the committee and the government delegation by his side. He said that both sides had reached an understanding.

“Akram Durrani has assured me that participants of the march will not enter the Red Zone,” he said. “Whether it be a dharna or a jalsa, it should be peaceful.”

Pervez Khattak said that the Rahbar Committee had not asked for the prime minister’s resignation neither had it put forth the demand for elections. “We hope the JUI-F will conduct its protest within the limitations of the constitution,” he said.

“If that happens, then the government will not block any roads or create any hurdles for the march. The containers will start going away,” he added. Pervez Khattak said that according to the agreement, the JUI-F will hold its jalsa in at the Peshawar Mor ground. He refuted allegations that a deal had been reached between the government and the Rahbar Committee.

“No deal has taken place. We are democratic people. This is not like NRO. That happens when someone does something bad,” he said.