After the fiasco, Twitter is abuzz with #boycottbankAlfalah trend 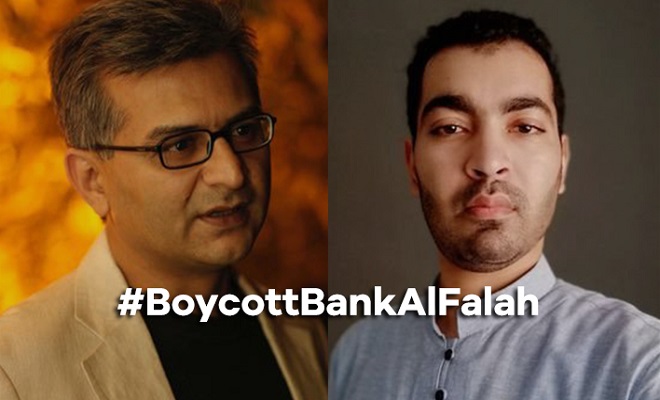 Very recently, Twitter saw a spat between Fazeel Tajammul – an employee of Bank Alfalah- and Hasan Zaidi – a journalist at Dawn. The two got in a verbally abusive and way below the belt Twitter quarrel on late Tuesday night, and next thing we know: Fazeel was fired by his organization.

Hasan took it to Twitter to pass a comment on Prime Minister Imran Khan’s late night address to the nation, Fazeel responded with some inappropriate comments in a Tweet which initiated a heated argument between the two. Soon Twitter saw a disgusting exchange of words between the banker and the journo, and it got way out of hand.

However, as per sources Hasan used his personal influence and contacts to first find Fazeel’s whereabouts and next have him fired by Alfalah Bank. The situation aggravated to such an extent that the bank and CEO personally issued a clarification statement and condemned its (now former) employee’s behavior.

However, Alfalah’s action has landed the bank in hot waters on social media.

A trend of #boycottbankAlfalah is circulating on social media and various people are opting to withdraw their money from the bank. The reaction has come on the back of a) the decision being taken under influence b) the bank’s attempt to restrict an employee’s freedom on speech on social media.

Supporters, demanding to reinstate Fazeel, argue that whatever happened between the two was on personal level and the bank does not hold the right to interfere as Fazeel was not representing the bank at the time of this spat.

Journalists questioning Hasan’s behavior are also raising concern as to how Dawn should deal with Hasan, who hasn’t gotten into such a situation for the first time.

Albeit that one cannot deny the distasteful remarks from Fazeel, it was equally evident that Hasan stood at the same level of inappropriate behavior. So what do you think of this matter?