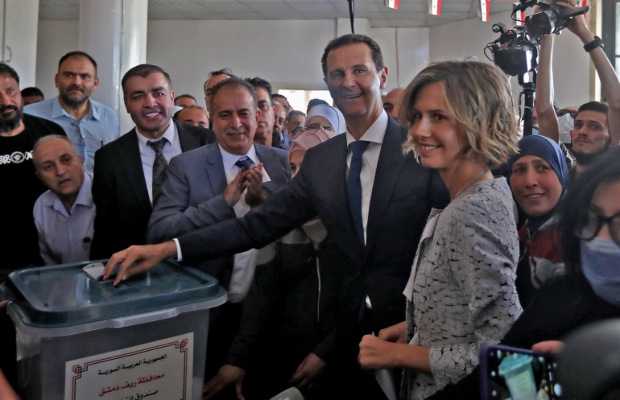 Bashar al-Assad won a fourth term in office as president of war-ravaged Syria with 95.1% of the votes in the elections.

Head of parliament Hammouda Sabbagh announced the results at a news conference on Thursday, saying that the voter turnout was around 78%, with more than 14 million Syrians taking part.

A statement was issued on Assad’s election campaign’s Facebook page, quoted him saying, “Thank you to all Syrians for their high sense of nationalism and their notable participation. … For the future of Syria’s children and its youth, let’s start from tomorrow our campaign of work to build hope and build Syria.”

The former state minister Abdallah Salloum Abdallah and Mahmud Merhi, a member of the so-called “tolerated opposition”, long dismissed by exiled opposition leaders as an extension of the regime, were Assad’s opponents in the elections.

On the other hand, the  West accuses the polls were “neither free nor fair”!

On the eve of the election, the US, Britain, France, Germany, and Italy said the poll was “neither free nor fair”, while Syria’s fragmented opposition has called it a “farce”.

The foreign ministers of France, Germany, Italy, Britain, and the United States said in a statement criticizing Assad ahead of the election that the vote would not be free or fair.

While, Turkey, regarded as an Assad adversary, had also said the election was illegitimate.

2021’s presidential vote is the second since the beginning of Syria’s uprising-turned-war a decade ago, a conflict that has killed hundreds of thousands of people and forced millions to leave the country.

Assad’s government says that the election on Wednesday shows Syria is functioning normally despite the decades-old conflict, which has killed hundreds of thousands of civilians and driven 11 million people – about half the population – from their homes.

Back in 2014, Al-Assad won the elections nearly 89 percent of the vote.