Beijing Hit with Worst Sandstorm in a Decade

Poor visibility caused hundreds of flights to be grounded and cancelled while traffic choked the roads. 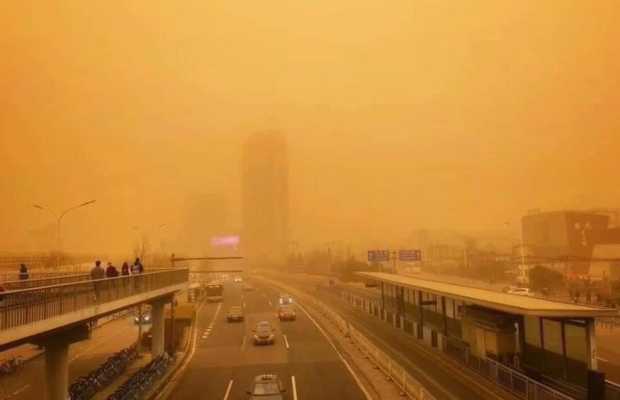 Beijing, China’s capital city was hit by the worst sandstorm in a decade on Monday.

Beijing was cloaked in an apocalyptic yellow-brown haze as the strong dusty winds blew across the city. The situation turned worst combined with already high air pollution.

Poor visibility caused hundreds of flights to be grounded and cancelled while traffic choked the roads.

According to The National Meteorological Center, Monday’s storm had developed in the Gobi Desert in the Inner Mongolia Region. The schools in the region had been advised to close and bus service added to reduce residents’ exposure to the harsh conditions.

“This is the most intense sandstorm weather our country has seen in 10 years, as well as it covering the broadest area,” the center shared the update on its website.

The images circulating on social media reveal the intensity of the sand storm.

The Skyscrapers in the center of Beijing appeared to drop from sight amid the dust and sand.

While the traffic was also affected.

As being reported, Monday saw more than 400 flights out of the capital’s two main airports canceled amid high winds and low visibility.

Several people also shared screenshots of the City’s air quality indexes that showed readings of more than 9,000, officially “beyond index”.

As being reported at least 341 people were reported missing in Mongolia, which was also hit by Beijing Hit with Worst Sandstorm, and flights were grounded out of Hohhot in inner Mongolia.

tweet
Share on FacebookShare on TwitterShare on PinterestShare on Reddit
Saman SiddiquiMarch 15, 2021
the authorSaman Siddiqui
Saman Siddiqui, A freelance journalist with a Master’s Degree in Mass Communication and MS in Peace and Conflict Studies. Associated with the media industry since 2006. Experience in various capacities including Program Host, Researcher, News Producer, Documentary Making, Voice Over, Content Writing Copy Editing, and Blogging, and currently associated with OyeYeah since 2018, working as an Editor.
All posts bySaman Siddiqui