Police detains a man alleged for the attack. 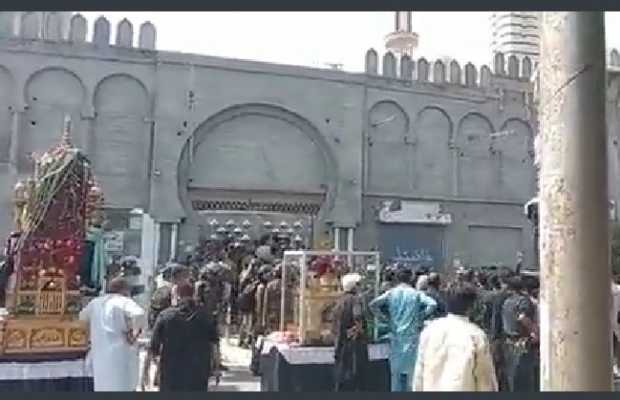 At least five people were killed and more than 30 injured in a reported grenade attack on Muharram profession in Bahawalnagar, on Thursday.

The alleged attacker who hurled a cracker on the Ashura procession has been arrested by police.

As being reported, a man hurled a grenade at a procession passing by Jamia Masjid in Muhajir Colony in Bahawalnagar at around 10 am.

Punjab Home Minister Raja Basharat said two of the injured were in critical condition and undergoing treatment at Bahawalpur Victoria Hospital, where all wounded had been shifted.

Punjab Chief Minister Sardar Usman Buzdar chaired a high-level meeting at the Safe City Authority and ordered the Counter-Terrorism Department to submit a report on the Bahawalnagar blast.

In a statement shared on Twitter by PUC president and Special Representative of the Prime Minister on Religious Harmony Hafiz Tahir Mehmood Ashrafi said, “Anti-Islam and anti-Pakistan elements want to spread terrorism and extremism to create chaos in Pakistan, [attempts at which] have been made unsuccessful by the Pakistani nation in the past and will be made unsuccessful now as well.”

Strongly condemn the Cracker attack on #Ashura Jaloos in #bahawalnagar
Thoughts and Prayers with the victims, Allah Almighty may heal their wounds & bless them with speedy recovery, Aameen #Ashura #يوم_عاشوراء https://t.co/zHCZY4vuQr

Soo there is law & order situation in #Bahawalnagar as Jaloos was attacked with cracker from Mosque as per Jaloos attendants pic.twitter.com/yNoN2JZPRd

It was "not" cracker attack. It was grenade attack also Injured confirms there was firing immediately after grenade was thrown#Bahawalnagar pic.twitter.com/qZJAxtSXsr