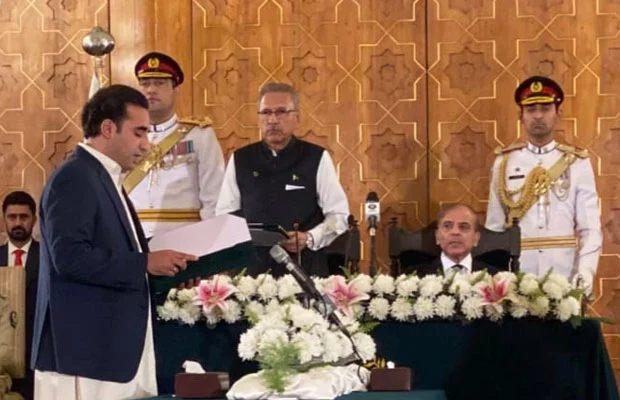 Bilawal Bhutto Zardari has been sworn in as federal minister on Wednesday.

Pakistan Peoples Party (PPP) chairman is likely to be given the portfolio of the foreign ministry.

President Dr. Arif Alvi administered the oath to Bilawal Bhutto-Zardari during a ceremony held at the Aiwan-e-Sadr in Islamabad.

He will be following in his maternal grandfather Zulfiqar Ali Bhutto’s footsteps, who served as the foreign minister from 1963 to 1966 and then from 1971 to 1977.

He also became chairman of PPP at the age of 19 three days after his mother former prime minister Benazir Bhutto’s assassination.

tweet
Share on FacebookShare on TwitterShare on PinterestShare on Reddit
Saman SiddiquiApril 27, 2022
the authorSaman Siddiqui
Saman Siddiqui, A freelance journalist with a Master’s Degree in Mass Communication and MS in Peace and Conflict Studies. Associated with the media industry since 2006. Experience in various capacities including Program Host, Researcher, News Producer, Documentary Making, Voice Over, Content Writing Copy Editing, and Blogging, and currently associated with OyeYeah since 2018, working as an Editor.
All posts bySaman Siddiqui