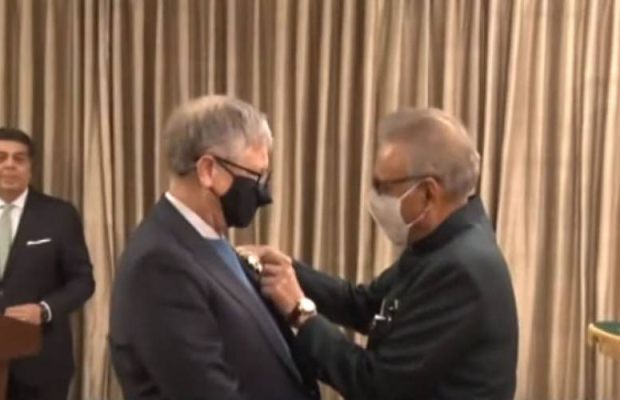 Bill Gates has been conferred with Hilal-e-Pakistan on Thursday.

President of Pakistan Dr. Arif Alvi conferred the Hilal-e-Pakistan award to Microsoft co-founder Bill Gates for his efforts in eradicating polio from the country.

The ceremony to honour the co-chair of the Bill and Melinda Gates Foundation was held at the President’s House in Islamabad.

Earlier in the day,  Microsoft founder Bill Gates arrived in Islamabad on a day-long first-ever visit to Pakistan where he met Prime Minister Imran Khan.

As being reported, eradication of polio and other issues were discussed during the meeting.

While the co-founder of Microsoft also visited Pakistan Polio Program in Chak Shehzad.

On this occasion, Bill Gates was briefed about the anti-polio campaign.

n the briefing, Bill Gates was informed that Pakistan has been polio-free for one year with the cooperation of polio workers and parents, while Bill Gates said that cooperation with Pakistan in the polio program will continue.