4 killed, 7 injured in a blast at petrol pump’s electric room in Karachi

The explosion occurred near Abdullah College 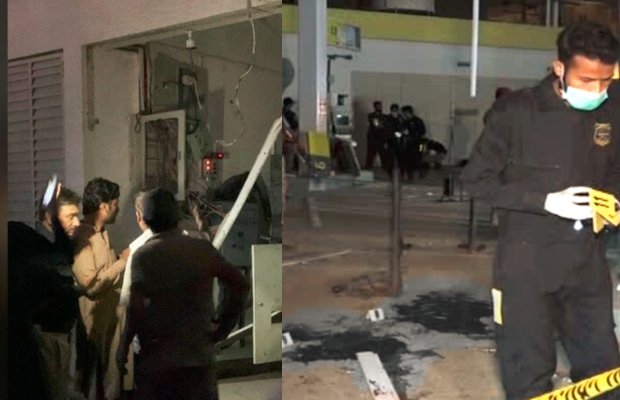 4 killed, 7 injured in a blast at a petrol pump in Karachi on Friday evening.

As being reported, a blast at the petrol pump’s electric room in Karachi’s North Nazimabad area near the board office.

The intensity of the blast left the glasses of nearby buildings’ windows shattered, causing panic among the masses.

While most of the injured were the motorcycle riders who were waiting for their turn to fill petrol in their rides.

The deceased and the wounded were shifted to the Abbasi Shaheed Hospital for medical treatment and medico-legal formalities, respectively.

All the deceased were men while the injured included a woman as well.

Central SSP Malik Murtaza said that the blast took place inside the electricity room of the fuel pump.

He said that an “initial investigation suggests that the explosion did not result from a mischief”.

“The room where the explosion occurred didn’t have a gas cylinder installed,” said SSP Murtaza.

Meanwhile, police also called the bomb disposal squad to ascertain the exact nature of the blast.

tweet
Share on FacebookShare on TwitterShare on PinterestShare on Reddit
Saman SiddiquiOctober 30, 2021
the authorSaman Siddiqui
Saman Siddiqui, A freelance journalist with a Master’s Degree in Mass Communication and MS in Peace and Conflict Studies. Associated with the media industry since 2006. Experience in various capacities including Program Host, Researcher, News Producer, Documentary Making, Voice Over, Content Writing Copy Editing, and Blogging, and currently associated with OyeYeah since 2018, working as an Editor.
All posts bySaman Siddiqui