The blast targetted a van of the Elite Force of Punjab Police. 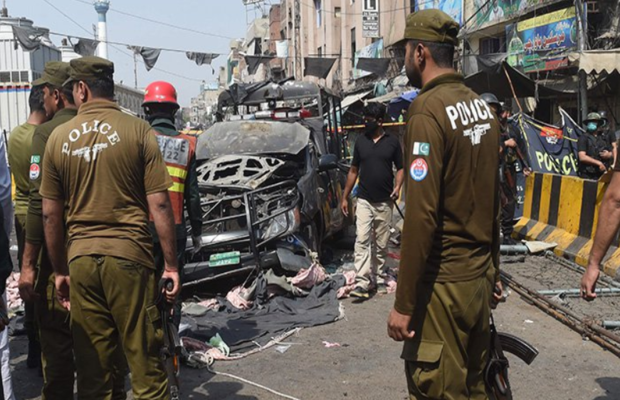 Suicide blast outside Data Darbar leaves at least 9 dead, including 5 policemen and 27 people injured on Wednesday.

Following the blast, heavy contingents of Punjab Police reached the site of the incident. Entry to Darbar has been restricted and the injured and bodies were rushed to nearby Mayo Hospital.

Inspector General of Punjab Police Capt. (Retd.) Arif Nawaz Khan has confirmed that the target of the attack was the mobile of the Elite Force parked near Gate Number 2 of Data Darbar, which occurred at 8:40 am.

“The attacker could have hit another side (of the Data Darbar) but chose to approach the police van stationed there, he told the media outside the shrine. The police are stationed there round the clock as part of routine security”, he said.

Further investigations are underway.  Chief Minister Sardar Usman Buzdar has sought a report from Punjab IG and chief secretary (home) regarding this incident.

The shrine has been targeted previously back in 2010, when a suicide attack there killed more than 40 people. The shrine is guarded by heavy security.