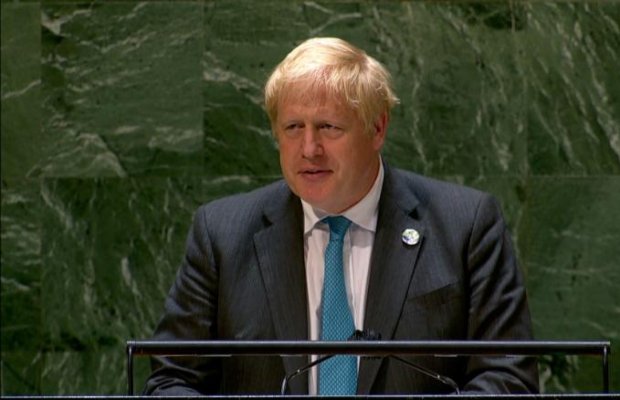 British PM Boris Johnson tells the world to follow the example of Pakistani premier Imran Khan for his efforts of planting a Billion Tree Tsunami.

Prime Minister Boris Johnson addressed the United Nations General Assembly session over the climate push and advised the world leaders to follow in the footsteps of the Pakistani premier on planting trees to fight climate change.

“I invite everybody to follow the example of Imran Khan of Pakistan who has pledged to plant 10 billion trees in Pakistan alone,” said Boris Johnson.

“We must show that we are capable of learning and maturing and finally taking responsibility for the destruction we are inflicting, not just upon our planet, but upon ourselves. It’s time for humanity to grow up.”

The clip of Jonson’s speech was also shared by the British High Commissioner to Pakistan Christian Turner in a tweet.

“PM BorisJohnson calls on the world to follow the example of Imran Khan kamyabi against climate change,” he captioned the video clip.

The United Kingdom premier, during his annual UNGA address, told the world leaders to “grow up” and tackle climate change, adding, it is up to the developed world to acknowledge the responsibility and help the developing world in achieving these targets.

“If we keep on the current track then the temperatures will go up by 2.7 degrees or more by the end of the century, never mind what that will do to the ice floes,” Johnson told the UN General Assembly on Wednesday night.

“We will see desertification, drought, crop failure, and mass movements of humanity on a scale not seen before. Not because of some unforeseen natural event or disaster, but because of us, because of what we are doing now.”

Johnson is due to host COP26 – a crucial United Nations climate summit – in the Scottish city of Glasgow next month.