According to eyewitnesses, a blast of unknown nature took place near a Coast Guard vehicle on Dawood Pota Road 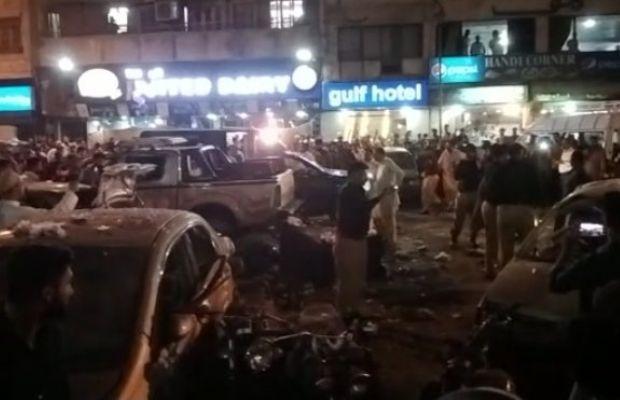 One dead and 13  people were injured in a blast reported in Dawood Pota Road, Karachi’s Saddar area on Thursday evening.

Deputy Inspector General (DIG) South Sharjeel Kharal has confirmed that one person was killed in the blast.

He added that multiple cars were damaged and the intensity of the blast is being determined.

According to eyewitnesses, a blast of unknown nature took place near a Coast Guard vehicle.

Law enforcement agencies have arrived at the scene and are investigating the nature of the blast.

While the injured have been shifted to Jinnah Hospital.

According to hospital sources, ball-bearing wounds were found on the body of the deceased, which proves that it was a bomb blast in which ball-bearing were used.

This is a developing story, more details are being released.

tweet
Share on FacebookShare on TwitterShare on PinterestShare on Reddit
Saman SiddiquiMay 12, 2022
the authorSaman Siddiqui
Saman Siddiqui, A freelance journalist with a Master’s Degree in Mass Communication and MS in Peace and Conflict Studies. Associated with the media industry since 2006. Experience in various capacities including Program Host, Researcher, News Producer, Documentary Making, Voice Over, Content Writing Copy Editing, and Blogging, and currently associated with OyeYeah since 2018, working as an Editor.
All posts bySaman Siddiqui