Mr. Johnson and Ms. Symonds were the first unmarried couple to live in Downing Street, having moved in July 2019. 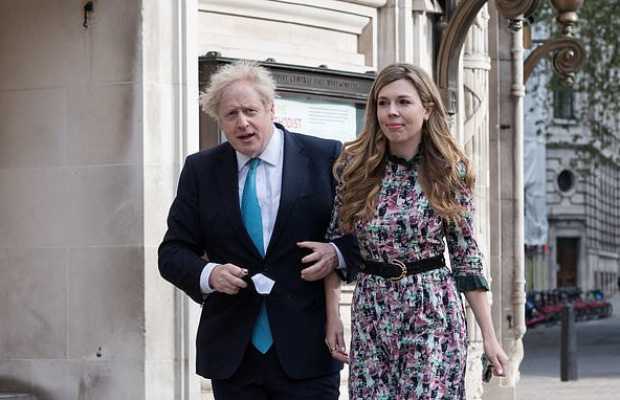 Though Downing Street has declined to comment, there have been some official congratulatory messages circulating on social media.

Work and Pensions Secretary Therese Coffey in a tweet said: “Congratulations @BorisJohnson and @carriesymonds on your marriage today”.

Huge congratulations to @BorisJohnson & @carriesymonds on your wedding today 🎉❤️🥂

According to the news sources the wedding was held in front of close friends and family on Saturday.

According to a report published by the Mail on Sunday,  30 guests were invited to the ceremony at short notice – the maximum number of attendees allowed under Covid restrictions in England.

A small number of church officials were involved in preparations for the Catholic ceremony, which was officiated by Father Daniel Humphreys, it added.

If true, known for his colourful love life, 56-year-old Johnson is going to be the second British prime minister to marry while in office and the first in nearly two centuries with Robert Jenkinson the last in 1822.

The pair got engaged in December 2019, and have a one-year-old baby son, Wilfred.

Mr. Johnson and Ms. Symonds were the first unmarried couple to live in Downing Street, having moved in July 2019.

The news has left the British social media in frenzy:

Congratulations and all that, but a serious question for the Catholic Church: how did this twice-married serial adulterer get a Catholic wedding? https://t.co/QICz1Lc9KE

In a surprise move the Roman Catholic Church sanctions multiple divorces, serial adultery and having babies outside of marriage by giving its public blessing to Boris Johnson as it confers on him the honour of using Britain’s holiest Catholic church for his 3rd wedding.

Boris Johnson, doing his best to bring British government into disrepute, now seems to have attempted to do the same to the Catholic Church! #boriswedding

In order to marry in a Catholic church, Mr Johnson could have had his two previous marriages recognised as annulledhttps://t.co/x5rZ8LPSqZ

If it wasn't bad enough, the hierarchy of the Catholic Church allowed him to marry in the capital's cathedral. How to sh1t on ordinary Catholics from a great height. #BorisWedding

Boris Johnson announces his wedding day in the media, just as government lawyers go to court against doctors and lawyers, to explain why they didn’t protect NHS staff and patients.

Just a coincidence I’m sure. @EveryDoctorUK