Rescue operations with fire brigades and Navy helicopters is underway 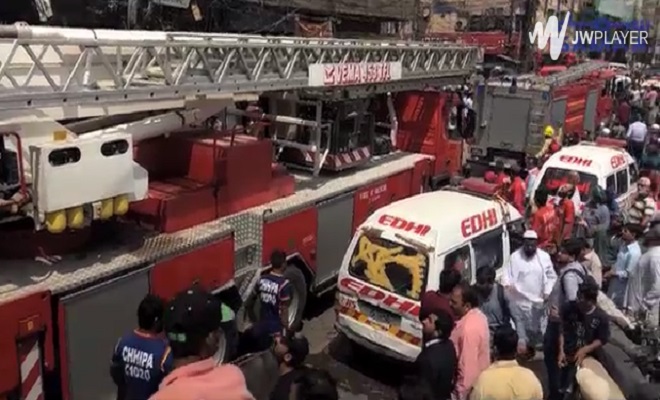 At least two people are being reported dead and multiple injured after a 12 storey building caught fire in Gulshan-e-Iqbal area of Karachi.

According to reports the fire erupted on the 3rd and 4th floor of Noor Trade Centre on University Road, escalating and engulfing the 5th floor as well.

Fire brigades and Naval helicopters carried out  rescue operations in the building. As per latest figures, several people jumped from the building to save themselves where two died at JMPC and others have been taken to Civil Hospital, Karachi.

Casualty reported is said to be of a 20 years old boy and a 35 year old while others under treatment in Jinnah Hospital have been termed stable.

More than 50 people were trapped inside and on the rooftop of the building where the fire spread. The trapped people waited for more than an hour before any rescue operations could begin. Two people reportedly jumped from the building to save his life, whereas, others were seen making attempts to come down through ropes.