The passengers were informed that as per policy bulkhead seats can only be availed after additional payment but they refused and occupied the seats forcefully. 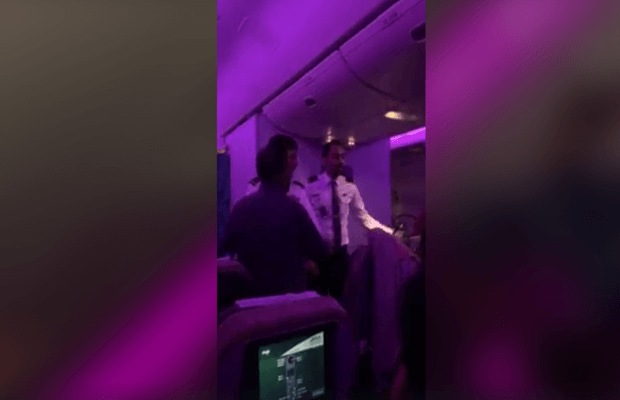 Pakistan International Airline has issued guidelines for cabin crew and passengers after a video from fight went viral on social media.

It was earlier on Wednesday when a video surfaced showing a fight between two passengers and flight crew on-board PIA flight PK-757 en route to London from Lahore.

Reportedly, two passengers on the flight sat on the bulkhead seats without payment and exchanged hands afterwords with the PIA staff, when they were asked to vacate the seats. While a passenger was filming the whole incident and staff snatched a mobile phone from her.

The passengers were informed that as per policy bulkhead seats can only be availed after additional payment but they refused and occupied the seats forcefully.

As the flight landed at the Heathrow airport, the passengers engaged in the fight were taken into custody by the London police.

GM Flight Services taking notice of the brawl said an investigation into the matter is underway.

In order to avoid such incidents in the future, the administration has issued special instructions to the flight attendants in a letter to cabin crew members by the PIA’s Manager Flight Services about the bulkhead seats.

Flight attendants have been directed to maintain discipline while dealing with the passengers for the payment of additional charges of the seats.

It is also advised that the flight supervisor should play a role in resolving the matter between passengers and cabin crew.