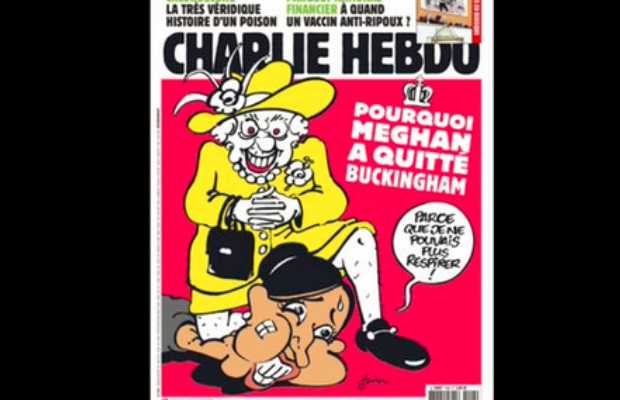 Hitting at the recent restrain of the relationship between Megan and the British Royal family, the magazine cover features Queen Elizabeth pressing her knee against Meghan Markle’s neck, with the caption reading: “Why Meghan left Buckingham.”

Markle, the Duchess of Sussex and the wife of Prince Harry is seen lying on the ground saying: “Because I couldn’t breathe anymore.”

Several social media users have slammed the publication as racist and distasteful for portraying Meghan Markel as George Floyd, the Black American, who was killed by a Minneapolis police officer last year in May.

The cartoon comes days after Markle and Harry’s appearance in an interview with Oprah Winfrey.

Megan in the bombshell interview had accused the British press as well as the royal family of racism.

Meghan, a biracial American actor, revealed during the interview that when she was pregnant with her son Archie, a member of the royal family expressed “concerns…about how dark his skin might be”.

Dr. Halima Begum, CEO of the Runnymede Trust, a UK-based racial equality think-tank, took to Twitter calling out the cover was “wrong on every level”.

#CharlieHebdo, this is wrong on every level. The Queen as #GeorgeFloyd's murderer crushing Meghan's neck? #Meghan saying she's unable to breathe? This doesnt push boundaries, make anyone laugh or challenge #racism. It demeans the issues & causes offence, across the board. pic.twitter.com/ptNXs8RtuS

Another social media user said, Is this the free speech that Charlie Hebdo is so passionate about? Racism, disrespect, and offense passed off as satire? I’m sorry but no Je suis for me. This is nothing but racist bigotry and inciting hate. Do better with your platform.”

Is this the free speech that Charlie Hebdo is so passionate about? Racism, disrespect and offence passed off as satire? I’m sorry but no Je suis for me. This is nothing but racist bigotry and inciting hate. Do better with your platform and grow up. pic.twitter.com/Id6hL53p2G

Social media on Sunday is buzzing with the latest Charlie Hebdo controversy. It seems like the west has come to taste its own medicine in the name of freedom of speech.

Will this be defended as "freedom of speech" or only when Hebdo insults Islam's prophet? #Islamophobia pic.twitter.com/K0vWFkOkgA

Those who defended #CharlieHebdo when it ridiculed the honour of #ProphetMuhammad are now furious over the magazine's cover of #QueenElizabeth kneeling on #Meghan's neck. 'Verily, the hypocrites will be in the lowest depth (grade) of the Fire.' Q 4:145 #Islamophobia is a disease. pic.twitter.com/bRwu39aVS6

I'm French and can see it as racist – if you can't it's not that you have some sophisticated sense of humour, it means you think racism and punching down is funny, full stop. 🤷‍♂️

If people frequently widely "misinterpret" (I think that's a very generous explanation of people's legitimate reactions to this kind of horrible imagery) your cartoons and "misidentify" the "real" targets, then the problem is obviously with the author, not the audience.

How to do a magazine cover that upsets everyone. Appalling misjudgement of the mood on all sides. #CharlieHebdo pic.twitter.com/UsLfMpD4CM

#CharlieHebdo first came for Muslims and now for Black people. What Charlie Hebdo is doing has nothing to do with #FreeSpeech but purely with commercializing and normalizing racism.

The magazine is habitual of offending religions, in past, it drew massive criticism from the Muslim world for publishing offensive caricatures and disrespecting Holy Prophet.

In 2015, 11 people, including the top editor and some of its leading cartoonists, were killed after Charlie Hebdo’s Paris headquarters was attacked by two brothers named Said and Cherif Kouachi for publishing controversial cartoons of the Prophet Muhammad (PBUM).