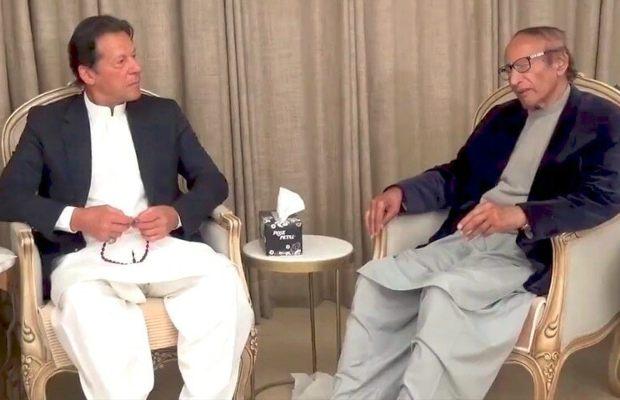 Shujat suggested reciting Ayat-11 of Surah Al-Hujurat with the translation before such an act and should not hurl abuses at his rivals.

PML-Q leader added that PM Imran Khan always talked about the ‘State of Madinah’ but it would have been better if he had recited Verse number 11 of Surah Al-Hujurat of the Holy Quran along with the translation.

He also advised all politicians to show politeness and tolerance in politics.

Ch Shujat quoted Surah Al-Hujurat’s Ayat-11: “O believers! Do not let some ˹men˺ ridicule others, they may be better than them, nor let ˹some˺ women ridicule other women, they may be better than them. Do not defame one another, nor call each other by offensive nicknames. How evil it is to act rebelliously after having faith! And whoever does not repent, it is they who are the ˹true˺ wrongdoers.”

With political tensions in Pakistan heating up ahead of a no-confidence motion against the ruling Pakistan Tehreek-e-Insaf (PTI), PM Imran Khan and federal ministers a number of times have called speeches against Pakistan’s Opposition parties, calling them names.

Prime Minister Imran Khan addressing a rally in Punjab’s Hafizabad, on Sunday said he was unfazed by the opposition’s attempts to de-seat him through the no-trust move.

PM said that the nation will witness that the “three rats who have united to dislodge the government will eventually get preyed upon” themselves.

At a public gathering in Vehari district’s Mailsi tehsil last week, the prime minister delivered a hard-hitting speech and addressed the planned opposition maneuver against him.