He said the judges of high courts were working diligently to dispense justice among people. 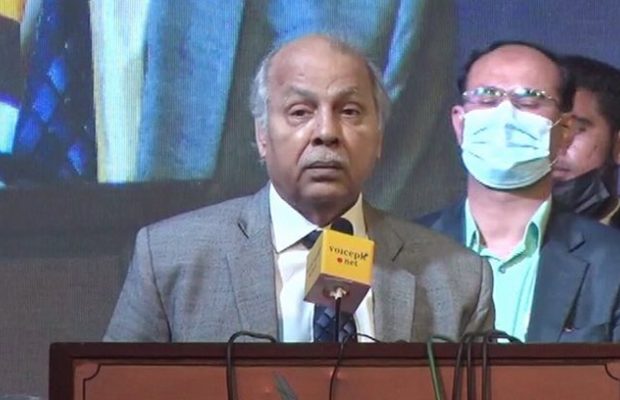 Chief Justice of Pakistan Justice Gulzar Ahmed rubbishes allegation of accepting any pressure from any institution and taking any dictation forbidding the mongers who spread ‘lies’ while cautioning them that they are weakening the state in this way.

Justice Gulzar Ahmed made it clear while addressing the two-day Asma Jahangir Conference in Lahore on Saturday. He said that “Our courts are working freely. There is no pressure from any side on them.”

“I have always upheld the law and the Constitution while delivering my judgments. My verdicts are as per my conscience,” CJP said.

He said “I accept no dictation. I have never seen any dictation. I work as per law so do all the other judges of the Supreme Court.”

He said that in institutions there is always a rule of law and not the rule of individuals. Nobody dared interfere in my decisions, he added.

He said the judges of high courts were working diligently to dispense justice among people.

“At least I do not recall any such instance,” he said.

“I have not taken the pressure of any institution or listened to any institution. No one tells me or guides me on how to write my verdict. I have never made any decision that I did so on someone else’s saying, nor has anyone had the courage to say anything to me.”

CJP Gulzar reiterated that no one interfered with his work and that he ruled on his cases according to “my understanding and conscience”, adding that “I have never listened, seen, understood or felt anyone’s dictation to me,” he added.

The chief justice said it was wrong to give “such generalised statements without quoting any [specific] instance”, adding that even if a mistake is made, “it is [eventually] corrected.”

Justice Gulzar added the courts were free to decide whatever they wanted to do and did so routinely. “Tell me which case was decided on whose dictation till today,” he said as he advised Kurd to “not tell wrong things to people, create discord and lift the people’s trust from the institutions.”

“We work without pressure. And we will continue to work independently. There is a rule of law in Pakistan, not the rule of mere individuals. We will continue supporting the law, constitution, and democracy in Pakistan. We will never accept any undemocratic setup. In such a scenario, we will better quit our jobs as we have done before,” the CJP stated.