Karachi had the highest weekly positivity rate of 19% 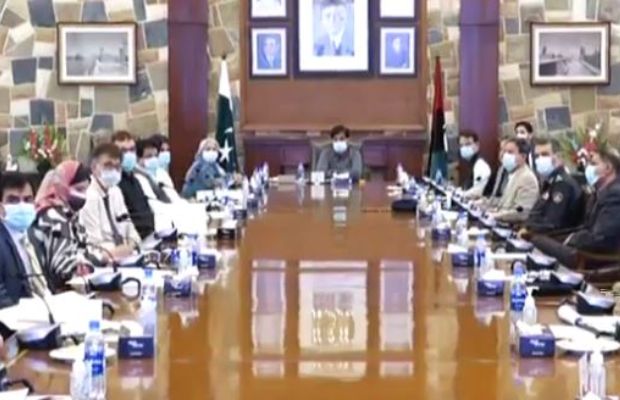 During the meeting, he emphasized that the positivity rate must be brought down before Eid ul Azha.

The health secretary informed the meeting that the positivity had started rising in the province on June 24.

The number of cases on that date was 248 while infections during the last 24 hours rose to 465, he said.

It was informed in the briefing that at present the total number of corona patients is 63 out of which 4 are on ventilators while 19% cases of corona appeared weekly in Karachi.

The Sindh chief minister said that hospital admission rates appeared low for the time being.

CM Sindh noted that Karachi had the highest weekly positivity rate of 19% — followed by Hyderabad at 0.39%.

Giving a breakdown of district-wise positivity rates in the metropolis, he said the rate in Karachi’s East district stood at 29%, followed by West at 21%, South at 18%, Korangi at 10%, Central at 8%, and Malir at 7%, respectively.

According to the spokesperson, on this occasion, the Chief Minister appealed to the people to follow the SOPs to avoid corona while getting vaccinated and given boosters.

The Chief Minister said that if more cases of Corona increase, the government may have to take drastic measures again.

tweet
Share on FacebookShare on TwitterShare on PinterestShare on Reddit
Saman SiddiquiJuly 1, 2022
the authorSaman Siddiqui
Saman Siddiqui, A freelance journalist with a Master’s Degree in Mass Communication and MS in Peace and Conflict Studies. Associated with the media industry since 2006. Experience in various capacities including Program Host, Researcher, News Producer, Documentary Making, Voice Over, Content Writing Copy Editing, and Blogging, and currently associated with OyeYeah since 2018, working as an Editor.
All posts bySaman Siddiqui