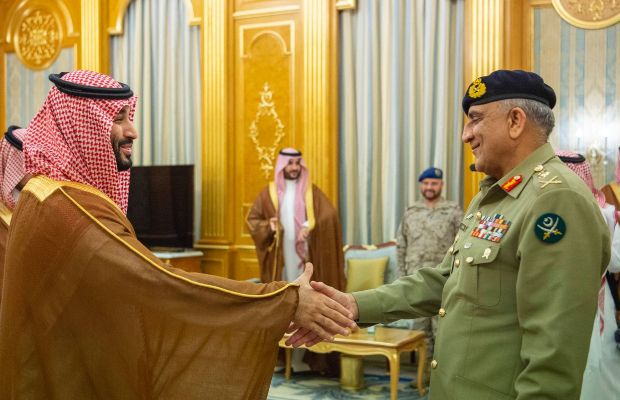 The Saudi Press Agency (SPA) reported that top Saudi honor has been conferred to Gen Bajwa in recognition of his distinguished efforts in consolidating and strengthening bonds of friendship and joint cooperation and developing Saudi-Pakistani relations.

We consider the security of Saudi Arabia as our own and are completely resolved to further cementing our multifaceted bilateral relationship including excellent defence cooperation. https://t.co/YqGz6Im673

“Both sides agreed upon enhancing defense cooperation in the fields of joint training, air defense, counter-terrorism, and communication/information domain,” it added.

“They also agreed to further enhance cordial relations and deep spirit of brotherhood into an enduring strategic partnership, being vital players in the region with significant responsibility towards the unity of Muslim Ummah,” the ISPR added.

tweet
Share on FacebookShare on TwitterShare on PinterestShare on Reddit
Saman SiddiquiJune 26, 2022
the authorSaman Siddiqui
Saman Siddiqui, A freelance journalist with a Master’s Degree in Mass Communication and MS in Peace and Conflict Studies. Associated with the media industry since 2006. Experience in various capacities including Program Host, Researcher, News Producer, Documentary Making, Voice Over, Content Writing Copy Editing, and Blogging, and currently associated with OyeYeah since 2018, working as an Editor.
All posts bySaman Siddiqui