This makes us wonder does a Wife of Colonel is also entitled as serving army office to go under an inquirey? She should be booked under the law! 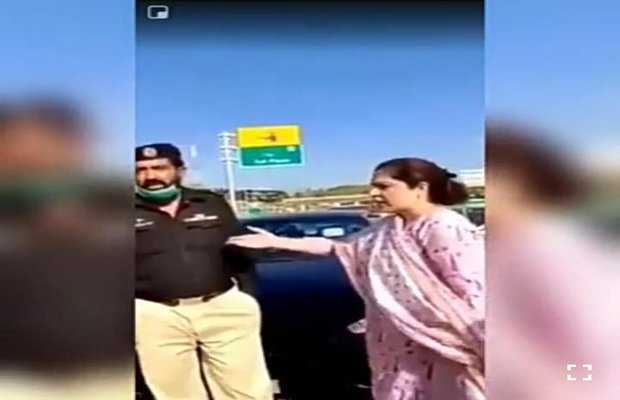 COAS Gen Qamar Bajwa has taken notice of the incident of misconduct by the wife of a serving army officer at a check post on Hazara Motorway after the video clips of the event went viral on social media.

As being reported an immediate disciplinary action is initiated against the officer on COAS directive.

According to the source, the incident occurred on 20th May around 5 pm local time when the woman along with a young man apparently seems to be her son, was traveling to Shankari from Mehsehra.

It came to light after a video clip went viral on social media showing a woman claiming to be the wife of a colonel misbehaved with a police officer at Hazara Motorway check post, upon being stopped by the constable on a traffic violation.

The video clips went viral on social media, that landed hashtag #ColonelKiBiwi into a worldwide trend:

The incident of #ColonelKiBiwi is not just a incident but it reflects the mindset of this special class towards bloody civilians#کرنل_کی_بیوی pic.twitter.com/6OgwM24K4i

This superiority complex must end now. A soldier should act like a soldier instead of being perceptive as a God. How this low life and ominous lady rebuked these police officials must be condemned hard and that colonel have to be strictly retributed. #ColonelKiBiwi pic.twitter.com/v0dmP5XN8x

Ladies and gentlemen! Presenting you The legendary couple of Pakistan..
Had the law punished this Colonel yesterday, his wife wouldn't dare to sabotage the law today…
Same shitt, different day…#کرنل_کی_بیوی pic.twitter.com/p3yaCHx3n0

Today on 27 Ramadan we got independence.But what type of independence it was?This colonel wife make me again feel that we are still slaves in our country. I truly support law abiding police officer .Hats off to you sir!!!!
#کرنل_کی_بیوی pic.twitter.com/f4QWSddd51

Colonel’s wife was arrogant and ill-mannered. She should be punished for arguing and hindering on duty police officer to perform his duties BUT she doesn’t depict any institution’s mindset or way of course. Some people have got licence to malign Army as if she was COAS, herself.

While the prompt notice taken by Gen Qamar Javed Bajawa COAS by ordering disciplinary action against the officer whose family misbehaved on the roadside with the police is also being praised on social media.

We must appriciate the prompt notice taken by Gen Qamar Javed Bajawa COAS by ordering disciplinary action against the officer whose family misbehaved on the road side with the police
It shows how good built in accountability system is in Pak Army.I hope civil side also follows it

Some soul searching is in order.

Pak Army is the most disciplined institution
Following half of its discipline in civilian institutns we can make Pak an ideal welfare state
PakArmy is trained to uphold national aspirations
I really appreciates COAS for taking immediate action against Colonel's wife#کرنل_کی_بیوی pic.twitter.com/y628snNaOV