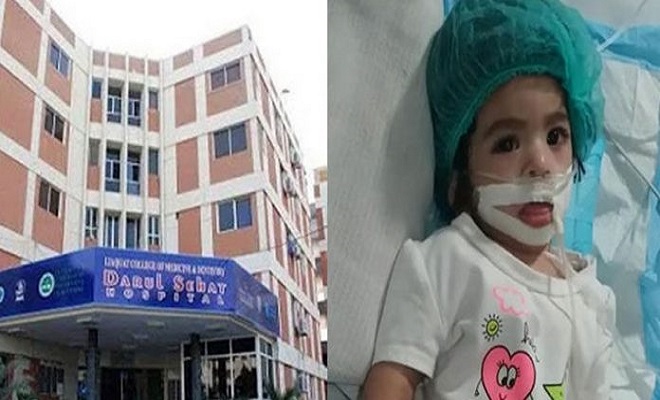 A complaint has been filed against the Darul Sehat hospital in Karachi when an infant went into coma allegedly due to the mistreatment received at the hospital.

The complaint has been filed at the Sharae Faisal Police Station and the parents are demanding strong legal action against the hospital ever since their young daughter became mentally paralyzed due to the medical staff negligence at Darul Sehat.

According to the complaint, Nishwa Ali and Amisha Ali,  were brought to Darul Sehat complaining of diarrhea. The girls’ also condition improved a day after treatment at the hospital. However, before they were discharged, Nishwa was given an injection leading to an abnormal heartbeat. Nishwa also started facing difficulty in breathing after which she was shifted to the ICU and placed on ventilator.

Talking to the media, Nishwa’s father, Qaiser Ali shared that his daughter’s condition had worsened due to overdose of potassium chloride that was injected by the hospital’s untrained staff. The injection that is administered through a period of 24 hours was given in a single dose due to which the condition of the infant worsened.

Qaiser Ali also alleged that Darul Sehat has recruited a number of  amateur medical technicians and staff on low salaries.

According to the hospital, Nishwa had been facing gastroentitis disease for which, an injection of potassium chloride was instantly administered. However, she was shifted on a ventilator because of an abnormal heartbeat and shortness of breath.

The hospital administration for now, has suspended the staff responsible. It has alsoassured that the hospital would bear all medical expenditures incurred on Nishwa.