A five-member bench heard the case. 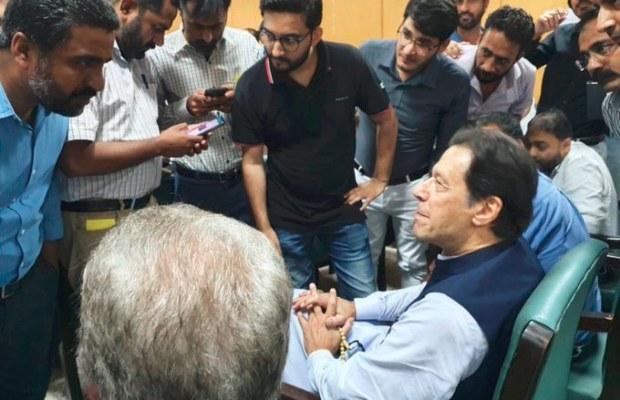 The Islamabad High Court (IHC) directed PTI Chairman Imran Khan to resubmit his response within the next seven days in the contempt of court case against him, on Wednesday.

The contempt of court case was filed against the PTI chairman for threatening a female judge.

While in response to the show cause notice issued by the IHC, the PTI chairman decided not to apologize for threatening additional sessions judge of Islamabad, Zeba Chaudhry, however, he offered to withdraw his remarks “if they were inappropriate.”

IHC Chief Justice Athar Minallah during the hearing said that he was disappointed by the response submitted by Imran Khan in the case.

IHC CJ  asked him to review his response and submit it once more.

“We did not expect a such statement from a person like Imran Khan. In the written reply, we hoped that Imran Khan would have felt his mistake. But it seems that Imran Khan does not feel what he has done,” he maintained.

The court adjourned the hearing and ordered that the response can be submitted through the PTI chairman’s counsel without asking Khan to come to the rostrum.

A special security plan devised ahead of the hearing allowed only those with permission to be allowed on court premises.

On Aug 23, a larger bench of the IHC issued a show-cause notice to PTI Chairman Imran Khan and summoned him in person on August 31, in contempt of court case pertaining to his threatening remarks about Additional Sessions Judge Zeba Chaudhry.

The reply stated, “Imran Khan does not believe in suppressing the feelings of the judges, he is ready to withdraw the words if they were inappropriate; the court should examine Imran Khan’s speech with context, he always obeys the law and the constitution. The PTI chairman believes in an independent judiciary. The show cause notice against him should be withdrawn.”

“It was in this misconception that she was referred to a magistrate,” it said, adding that the PTI chief had no intention of saying anything against the judicial officer.

“It is submitted that the respondent had no motive (ill-will) behind the said speech or remarks, nor were those directed specifically towards the judicial officer.”