Over 100 affected after a toxic gas leak in Karachi’s Keamari Sunday night. 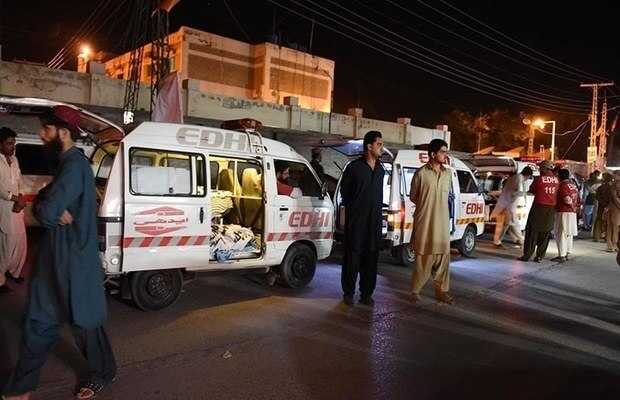 The death toll in Karachi’s mysterious gas leakage has surged to eight as one more person died because of the toxic gas poisoning on Monday night.

The Sindh Health Department confirmed the 7th death from the gas leak late Monday, meanwhile, another man died at the KPT Hospital.

As being reported, as many as 86 more people after inhaling the poisonous gas were brought to the hospital with severe breathing problems.

The authorities are yet to ascertain the real cause of the incident .  Sources claim that the leakage occurred during the offloading of chemicals from a cargo ship anchored at Keamari Jetty.

However, the spokesperson of the Karachi Port Trust (KPT) in a statement had claimed that reports pertaining to the gas being released by a recent ship that had anchored down at the port were untrue.

Meanwhile, the Police on Monday registered a first information report (FIR) after a gas leak in the city’s Keamari area killed six people and left dozens of others hospitalized a day earlier.

The FIR was registered at the Jackson police station under the supervision of SHO Malik Adil. As per the complaint, the poisonous gas affected people at 6 PM on Monday at Masan Road, Railway Colony, Jackson Bazaar, and surrounding areas.

According to CM House spokesperson, Rasheed Channa,  CM’s directives came in an emergency meeting at the CM House on Monday night after he visited the affected areas.

Patients affected form the piousness gas are being treated at Ziauddin Hospital Keamari, Jinnah Hospital, while Civil Hospital received seven patients and all were stable and had been discharged, according to hospital representative Khadim Rizvi.

Sindh Chief Minister Murad Ali Shah took notice of the incident and ordered the free medical treatment of everyone affected.

Around 100 patients were brought to Ziauddin Hospital Sunday night and most were given first aid and discharged. Everyone admitted had difficulty breathing and stomach pain and were given oxygen immediately, according to the hospital source.

Around 60 people are believed to be currently under treatment at the Ziauddin Hospital.

A total of 125 patients had been brought to Ziauddin Hospital Keamari since Sunday night. Early Monday, 11 new patients were brought in, including three children between the ages of three and 10.