The dengue epidemic is raging in Punjab, Khyber Pakhtunkhwa and Islamabad 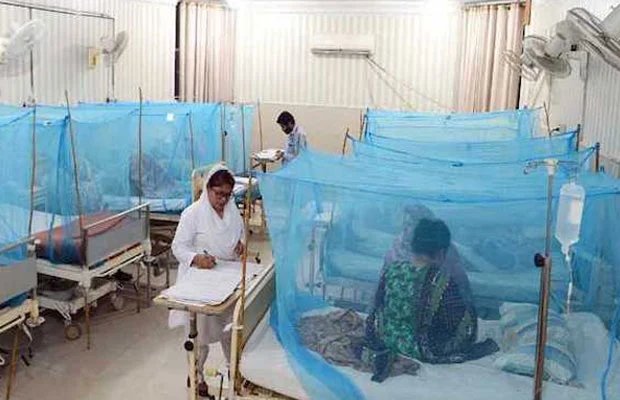 Dengue cases are surging in Pakistan and as of Thursday, the reported cases have crossed the 27,000 mark across the country.

According to the official tally, from January 1 to October 27, 27,672 people have tested positive for the mosquito-borne virus in the country.

While 67 deaths were reported as per the data of the ministry of federal health.

The dengue epidemic is still raging in Punjab, Khyber Pakhtunkhwa, and Islamabad

During the last 24 hours, 539 new cases and two deaths were reported in Punjab.

There were 12,224 confirmed cases in Punjab during the current year. While 8,203 cases have emerged only in Lahore.

Punjab Primary and Secondary Healthcare Secretary Sikandar Baloch in a statement on Thursday notified that 539 dengue patients were reported in Punjab and maximum cases of 423 were reported from Lahore and two patients one belonging to Lahore and the other belonging to Sheikhupura were succumbed to the dengue virus during past 24 hours.

Furthermore, 32 cases were reported from Rawalpindi; 9 from Faisalabad; 7 from Kasur; 6 each from Gujranwala, Okara, and Sheikhupura; 5 from Sargodha and Sialkot; 4 from Bahawalnagar; and 3 cases each were reported from Hafizabad and Khushab during the last 24 hours.

According to District Health Officer Islamabad, 121 people contracted the dengue virus during the last 24 hours in the federal capital,

The DEO said that at present there were 3,327 dengue patients in Islamabad.

In Khyber Pakhtunkhwa, 232 people were diagnosed with dengue fever.

The total number of active dengue cases in KP is 5,569 active.

In Peshawar 1,433 dengue cases and 7 deaths have been reported in the city so far.

Meanwhile, around 76 new cases of dengue fever have been reported in three districts of Balochistan increasing the total number of cases to 1826.