Donald Rumsfeld, US Secretary of Defense During Iraq War, Dies at 88

Former U.S. Defense Secretary has been regarded as the architect of two wars in Afghanistan and Iraq 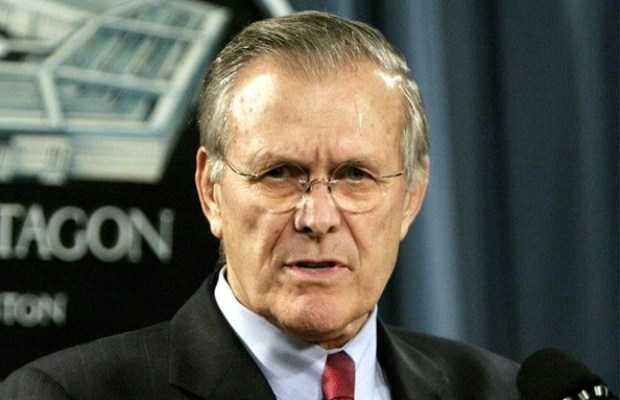 Donald H. Rumsfeld served as the secretary of defense for under two Us presidents, Gerald R. Ford and George W. Bush, who presided over America’s Cold War strategies in the 1970s and, in the new world of terrorism decades later, the wars in Afghanistan and Iraq.

He also had the distinction of being the only defense chief to serve two non-consecutive terms and was the youngest, at 43, and the oldest, at 74, to hold the post.

His family announced in a statement on Wednesday, saying, “It is with deep sadness that we share the news of the passing of Donald Rumsfeld, an American statesman and devoted husband, grandfather, and great grandfather. At 88, he was surrounded by family in his beloved Taos, New Mexico.”

“History may remember him for his extraordinary accomplishments over six decades of public service, but for those who knew him best and whose lives were forever changed as a result, we will remember his unwavering love for his wife Joyce, his family and friends, and the integrity he brought to a life dedicated to country,” the statement reads.

A statement from the family of Donald Rumsfeld: pic.twitter.com/AlKYxVvqgF

Former U.S. Defense Secretary Donald Rumsfeld has been regarded as the architect of two wars in Afghanistan and Iraq under former President George W. Bush.

H provided with the justification that Iraq held an active stockpile of weapons of mass destruction, despite insufficient evidence.

The news of his death has met with all sorts of reactions especially for the key role he played in the invasion of Afghanistan and Iraq.

“Absence of evidence is not evidence of absence”. – Donald Rumsfeld on weapons of mass destruction. Farewell to the king of doublespeak, who wrote a torture memo that allowed countless Iraqis to be terrorized and who never ever saw justice. Hope you’re reincarnated as a grub.

Donald Rumsfeld, one of the main architects of the Iraq war, has died.
Like all of us, he will face his Maker. Every "unknown" will be made clear to him, as they will be to each one of us.
And he will meet every soul killed as a result of his choices.https://t.co/Ni8jrxhwzx pic.twitter.com/KsD4tKlBdu

1983: Reagan envoy Donald Rumsfeld greets Saddam Hussein, who the US supported as he used chemical weapons during the Iran-Iraq War pic.twitter.com/OTzIHJHOfZ

donald rumsfeld has so much blood on his hand and is responsible for so much death and destruction in the name of US imperialism, it is a pox on our entire society that he was able to live this long and die peacefully when his genocidal policies cut so many lives short

I was at a Washington Wizards game in 2003.
At one point the jumbotron showed a man quickly walking through the crowd with a large security detail.
Everyone in the arena booed him.
And that my friends, is my favorite memory of Donald Rumsfeld.

The torture memo signed by Donald Rumsfeld on 12/2/02. Note his handwritten comment in the corner.

In case anyone tries to whitewash this war criminal’s legacy pic.twitter.com/D5xS07RL8N

Donald Rumsfeld's chief propagandist was David Frum, whom the left welcomed into their ranks as a credible media figure despite his repeated hoaxes and defense of torture. The modern left is the party of Donald Rumsfeld.

Donald Rumsfeld was no 'diplomat'. He was an unindicted war criminal.

At the bottom of the memo Donald Rumsfeld signed to green-light torture, he famously wrote: "I stand for 8-10 hours a day. Why is standing limited to 4 hours?" https://t.co/kpQPcpiMJ4

Also this earlier memo from 2002 which (with careful legalistic language) opened the door for U.S. military commanders to violate the Geneva Conventions at their own personal discretion. pic.twitter.com/I06OEwPM6Q