There has been no clue to her whereabouts since she stepped out of her house to dispose of garbage five days ago. 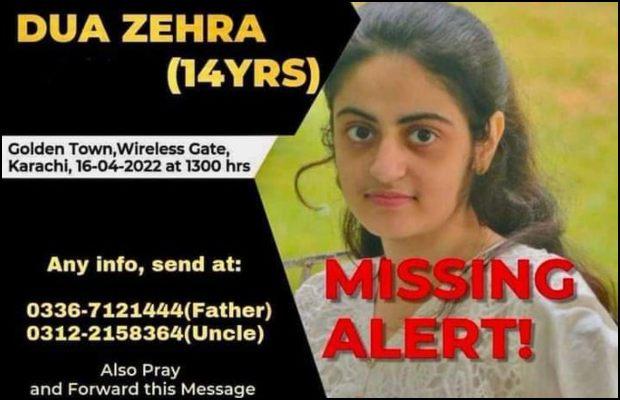 Pakistan prays for the safe return of a 14-year-old missing girl, Dua Zehra.

Dua Zehra went missing around six days ago from the Golden Town locality of the Al-Falah area of Karachi’s Shah Faisal Colony.

After a week of gone missing, there has been no clue about her whereabouts since she had stepped out of her home to dispose of garbage.

Her father had already filed a police complaint against unidentified suspects.

On Wednesday Dua’s father claimed that he had received two calls for ransom from the kidnappers.

“I don’t have enmity with anyone. I have received two calls for ransom from the kidnappers. One of the calls was made from a landline number, while the other was made from a mobile phone number on WhatsApp,” he said.

After receiving the ransom calls, he immediately informed the police about them. “I have provided the phone numbers to the police,” he said.

“My daughter wasn’t even going to school for the past one and a half years.”

Reportedly, the owners of the cell phones from which the calls for ransom were made had been taken into custody by the police.

In the latest development, the Police on Thursday carried out a raid in Sanghar for the recovery of Dua Zehra, however, they discovered another girl kept into custody forcefully.

Reportedly, a team of anti-violent crime cells (AVCC) also met with the father of Dua Zehra. AVCC SSP Zubair Nazir Shaikh said that they have formed three teams working on obtaining CCTVs to trace the suspects.

Investigations are being carried out, yet there is no such progress after almost a week of the incident which raises a question marks on the efficiency of our security departments.

While #DuaZehra remains among the top trends on the social media timeline, people can only pray for her safe and sound return.

Praying with all my heart for Dua Zehra.. may she come home today.. Safe and sound.. Ameen. #DuaZehra

May Allah protect her safe and bring back home soon #DuaZehra
pic.twitter.com/pcZiqjrJCA

5th Day today since #DuaZehra's disappearance. A girl steps down from her apartment on the 1st floor to dispose off 3 trash bags on the ground floor. She carries 2 bags in her hands towards the ground floor while the third is left in the apartment but she never returns for it… pic.twitter.com/HUAp5q0bg1

14 years old #DuaZehra had gone missing since 16 April, her father has already filed a complaint also appealed to Chief justice of Pakistan and questioned that you open courts at midnight my daughter is also a Pakistani why don't you open courts now?? pic.twitter.com/i64smNpLbg

Aslaam o Alaikum please make special duas for this daughter #DuaZehra May Allah protect her and return her to her family safe and sound ameen 😒🙏🤲🏻#duazehra
#DuaZehra pic.twitter.com/HsMPwJious