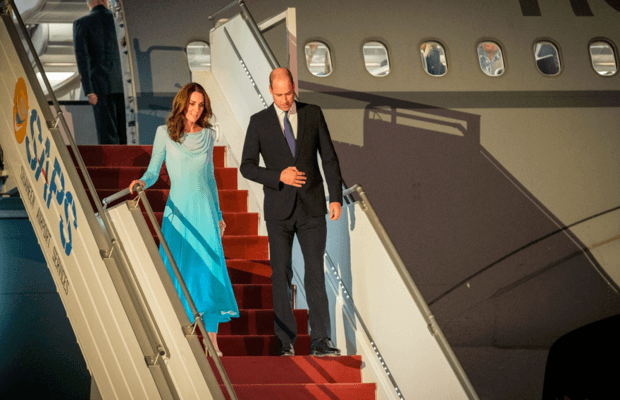 The Duke and Duchess of Cambridge have arrived in Pakistan on the historic 5-day Royal tour.

The Royal couple landed at the Nur Khan Air Base in Rawalpindi and were welcomed by Foreign Minister Shah Mahmood Qureshi and his wife. British High Commissioner in Pakistan Thomas Drew was also present at the airbase to welcome the royals.

A red carpet was rolled out for the Duke and Duchess of Cambridge were presented with flowers after they came out of the British flag carrier aircraft.

Security is expected to be on an extreme high for the couple’s first official trip to Pakistan. According to the Sun’s report, the royal couple will be guarded by 1,000 police officers during their five-day tour.

Prince William and Kate are the first royals to visit the country since 2006 when the Prince of Wales and Duchess of Cornwall visited Pakistan.

According to Hello’s report, the royal couple is traveling to Pakistan accompanied by an entourage of 14, including their private secretaries Simon Case and Catherine Quinn and communications secretary Christian Jones.

Another four members of the communications team, two assistant private secretaries, two programme coordinators, a PA, an orderly and a hairdresser will also join them.

tweet
Share on FacebookShare on TwitterShare on PinterestShare on Reddit
Saman SiddiquiOctober 14, 2019
the authorSaman Siddiqui
Saman Siddiqui, A freelance journalist with a Master’s Degree in Mass Communication and MS in Peace and Conflict Studies. Associated with the media industry since 2006. Experience in various capacities including Program Host, Researcher, News Producer, Documentary Making, Voice Over, Content Writing Copy Editing, and Blogging, and currently associated with OyeYeah since 2018, working as an Editor.
All posts bySaman Siddiqui