Rain with thunder is likely to lash the metropolis tonight and tomorrow. 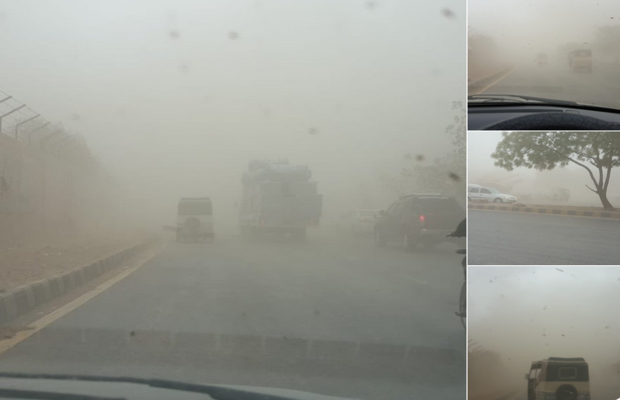 Dust storm along with strong winds continue to sweep across the city of Karachi from Sunday night, resulting in multiple casualties.

The severe weather conditions have claimed 3 lives and multiple people are reportedly injured due to various accidents of roof collapsing and trees uprooting in various parts of Karachi. Rescue teams are reported to be busy in clearing roads from uprooted trees, and fallen poles.

Several flights are also reported to be delayed due to reduced visibility caused by the dust storm.

The weather system is likely to intensify and grip most parts of the province of Sindh. According to the Pakistan Meteorological Department, there is a forecast of rains along with dust and thunderstorm for Karachi on Monday and Tuesday.

The current storm is caused by a low-pressure system, resulting in dropped temperatures, providing citizens with some relief from the scorching heat.

The director of the Pakistan Meteorological Department (PMD), Sardar Sarfaraz said, “Last night’s dust storm was stronger than expected. Winds blew at a speed of 65km/h and reduced the visibility to 500 metres.”

tweet
Share on FacebookShare on TwitterShare on PinterestShare on Reddit
Saman SiddiquiApril 15, 2019
the authorSaman Siddiqui
Saman Siddiqui, A freelance journalist with a Master’s Degree in Mass Communication and MS in Peace and Conflict Studies. Associated with the media industry since 2006. Experience in various capacities including Program Host, Researcher, News Producer, Documentary Making, Voice Over, Content Writing Copy Editing, and Blogging, and currently associated with OyeYeah since 2018, working as an Editor.
All posts bySaman Siddiqui