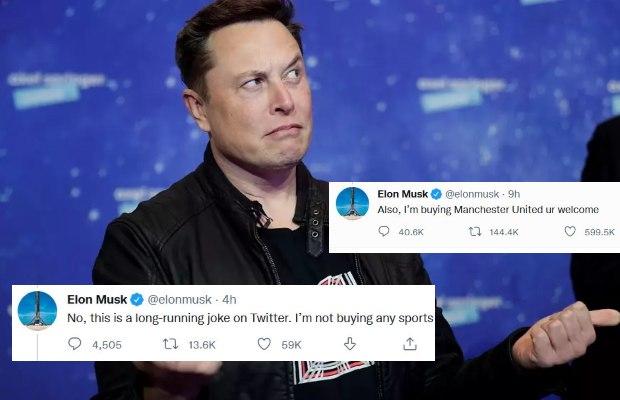 The Tesla Inc. chief executive officer and the world’s richest person let 4 1/2 hours go by before clarifying he was only joking about purchasing the English football club listed on the New York Stock Exchange.

It all started when Tesla Inc.’s CEO  tweeted about his political allegiances.

And when a Tesla fan club account asked whether he was serious, Musk replied no, he is not buying any sports teams, clarifying “this is a long-running joke on Twitter.”

No, this is a long-running joke on Twitter. I’m not buying any sports teams.

The well-intended joke let the Manchester United shares jump 17% at the start of early trading Wednesday, though the stock quickly pared gains and was up 3.2% to $13.19 as of 4:15 a.m. New York time.

Manchester United is valued at $4.6 billion, according to Forbes.

tweet
Share on FacebookShare on TwitterShare on PinterestShare on Reddit
Saman SiddiquiAugust 17, 2022
the authorSaman Siddiqui
Saman Siddiqui, A freelance journalist with a Master’s Degree in Mass Communication and MS in Peace and Conflict Studies. Associated with the media industry since 2006. Experience in various capacities including Program Host, Researcher, News Producer, Documentary Making, Voice Over, Content Writing Copy Editing, and Blogging, and currently associated with OyeYeah since 2018, working as an Editor.
All posts bySaman Siddiqui