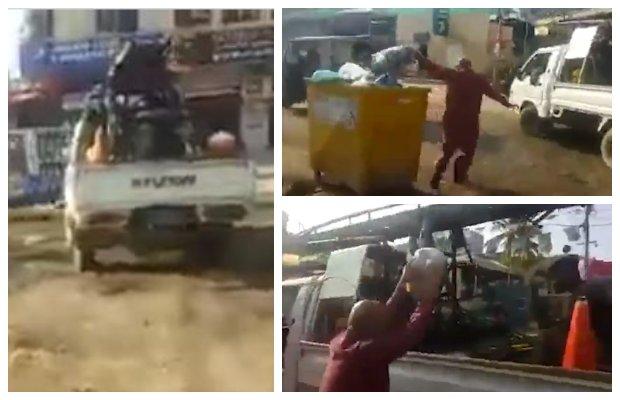 Enraged Karachiites toss garbage into KE van as the company is now charging KMC tax in the electricity bills.

A video of the incident went viral on social media, showing men running after picking up garbage bags from the bins installed by the KMC in the area and hurling them into a KE van passing by.

As reported, on average, a Karachiite pays Rs300-500 to scavengers monthly for collecting thrash from home, and if KMC provides this and other municipal services after collecting Rs300 tax in the electricity bill, and this is assumed that the company after collecting should be picking up the trash on daily basis as well.

The citizens have to pay the additional amount, they have launched a campaign of throwing garbage into KE vans.

This one such incident of this nature was recorded on camera and went viral on social media.

Reports have emerged that some citizens flung garbage bags into a KE van visiting a neighborhood in Karachi for routine work.

Here is how Twitter reacts to the viral video:

i love karachi and karachi walay, using humour as their coping mechanism 😭😭😭

KE charging KMC tax so they did this pic.twitter.com/uaVsxkHvkN

Following the fresh increase in electricity prices in Karachi. Flustered citizens have started a campaign to hurl trash into KE vans in response to it#Pakistan #Karachi pic.twitter.com/qQMFo0YuKD