The ombudsperson directed the Pemra management to submit a compliance report within seven days after receiving the order. 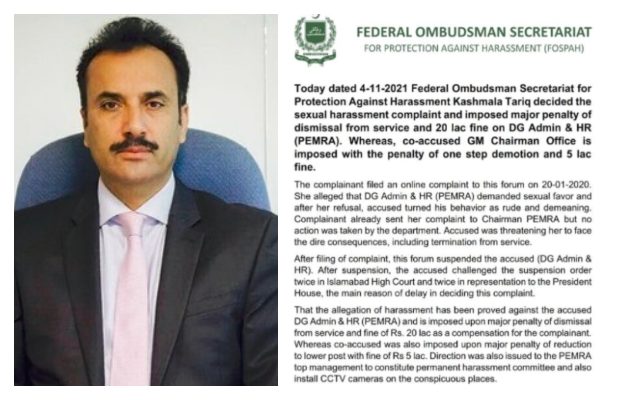 Federal Ombudsperson for Protection against Harassment of Women at the Workplaces Kashmala Tariq has ordered the dismissal of former Pakistan Electronic Media Regulatory Authority (Pemra) director-general, Haji Adam, over allegations of harassing a female worker.

While co-accused Pemra General Manager Fakhruddin was demoted and slapped with a penalty of Rs500,000.

Federal Ombudsman for Anti-Harassment Kashmala Tariq has issued a written decision on the petition filed by the female official a year and 10 months later. 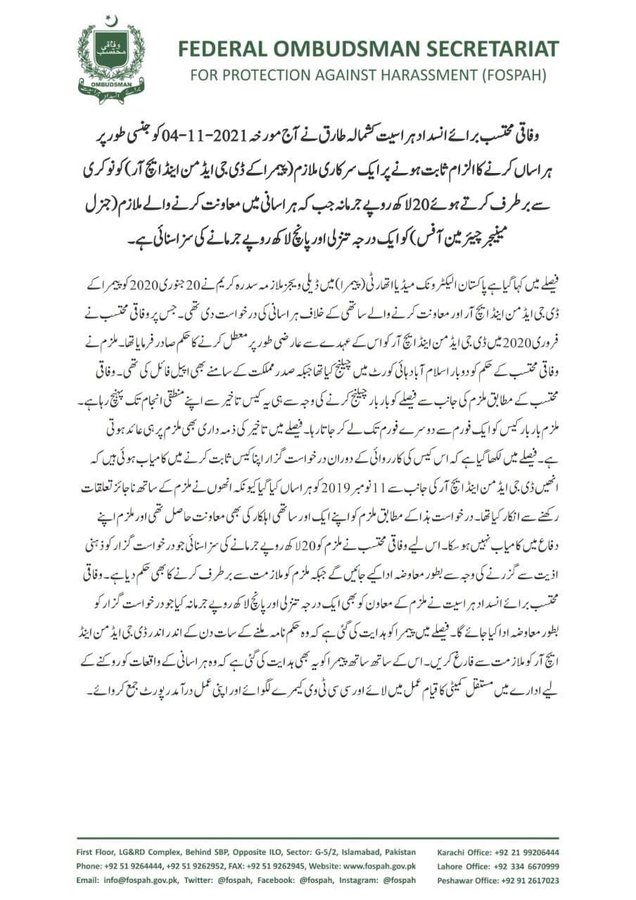 On which the Federal Ombudsman had in February 2020 ordered the temporary suspension of the DG.

The DG had twice challenged the order of the Federal Ombudsman in the Islamabad High Court and had also filed an appeal before the President.

According to the federal ombudsman, the case is reaching its logical conclusion due to the repeated challenge to the verdict by the accused. The accused repeatedly took the case from one forum to another and from one to another. The accused is also responsible for the delay in the verdict.

Quoting the complainant, the order said when she refused “sexual favours” to Adam, his behaviour turned “rude, disgusting and demeaning” towards her.

“Bringing all the pieces of evidence together […] the complainant has proved her allegation that [Adam] sexually harassed her [at] her workplace on November 11, 2019,” the order said.

“During the proceedings of this case, the petitioners have been able to prove their case that they were harassed by DG Admin & HR on November 11, 2019, for having illicit relations with the accused,” the judgment said.

Tariq has directed the Pemra authorities to install CCTV cameras everywhere in the office’s premises to avoid such incidents.

Similarly, I would also like the management to display [the] code of conduct and guideline[s] of FOSPAH (Federal Ombudsperson Secretariat for Protection against Harassment) [in] common areas,” the written order added.

The ombudsperson directed the Pemra management to submit a compliance report within seven days after receiving the order.

Tariq had earlier ordered Adam’s suspension in the case on February 4, 2020.