Here are some excerpts from  Shahid Afridi's biography "Game Changer". 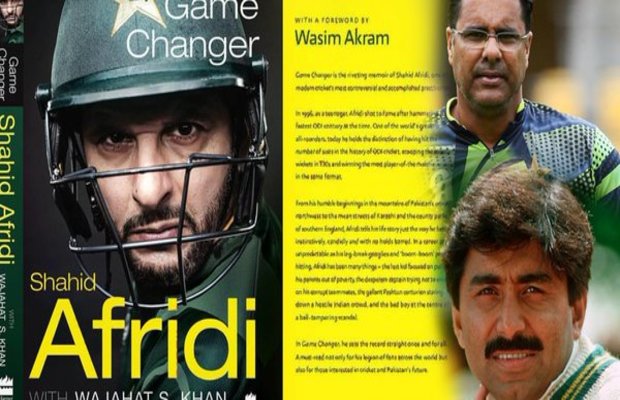 Shahid Afridi throughout his cricket career has been known as a force to reckon with. His recently launched biography, Game changer, was being called to bring about the unseen side of Afridi for his fans.

And as the title suggests, the revelations made about Pakistan cricket, put forward the ups and downs of Shahid Afridi’s cricket carrier.

Here are some excerpts from  Shahid Afridi’s biography “Game Changer”.  Shahid Afridi takes a dig at former Pakistani biggies revealing the account of many cricket campaigns.

The first shock to receive is about Shahid Afridi’s correct age.  As he reveals about his age stating, “I was just nineteen, and not sixteen as they claim. I was born in 1975. So, yes, the authorities stated my age incorrectly.”

Afridi shares his views on the nightmarish ’03 World Cup campaign and in particular on the leadership of Waqar Younis. In his view, Pakistan lacked unity. There was a change in the chain of command and Waqar, the new man at the helm, was, unfortunately, a terrible captain.

He couldn’t hold the team together. He couldn’t fight off the politics inside the dressing room. Afridi thinks Waqar himself was responsible for much of it. There was no leadership. 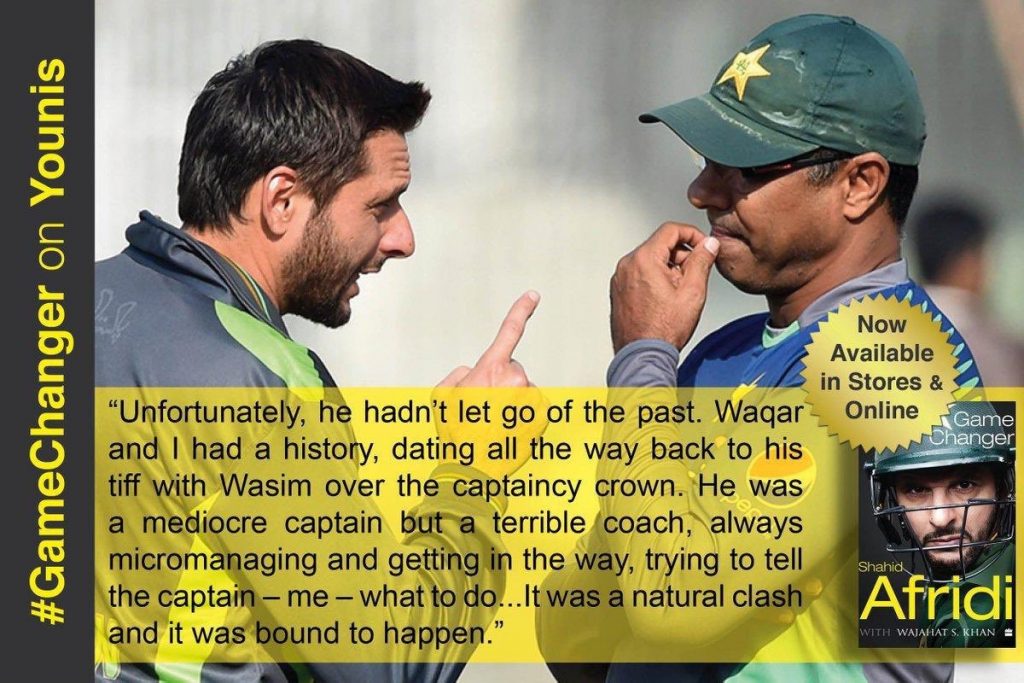 Afridi contemplates that with Wasim Akram in the side, many players including Rashid Latif, Inzamam and Saeed Anwar were in favour of Wasim being the captain. This is because Waqar did not have control over the team, neither he inspired them.

The younger team (Azhar Mahmood, Mohammad Sami, Saqlain and Afridi) who were looking for inspiration and had decided to keep out of the power politics that the seniors were involved in but wanted Wasim to lead. And then there was the Waqar group, which had Muhammad Yousuf and the likes, although they eventually crossed over to Wasim’s side.

The problem, operationally, was a complicated one: Waqar was empowered, officially, but the team wasn’t responding to him. There was every reason to do well with the line-up that we had. The team had a fairly large coaching unit as well. The infighting in the team had reached a crescendo since the captain’s hat was the real crown in 2003.

Consequently, there was a war between the Wasim and Waqar. Both Wasim and Waqar were fighting hard for the throne. Most of the team wanted Wasim to be the captain and he did lead them for a while.

But then the chairman of the PCB, Lt Gen. Tauqir Zia, sided with Waqar – there was too much politics involved. It proved to be a really bad decision. The fact that Waqar was not captain material reflected clearly in Pakistan’s dismal performance on the field.

Shahid Afridi also talks about PM Imran Khan in the Game Changer saying that he never got personal with any player, he actually didn’t like too many who played under him. He is running his cabinet in the same way he used to take his team up to. 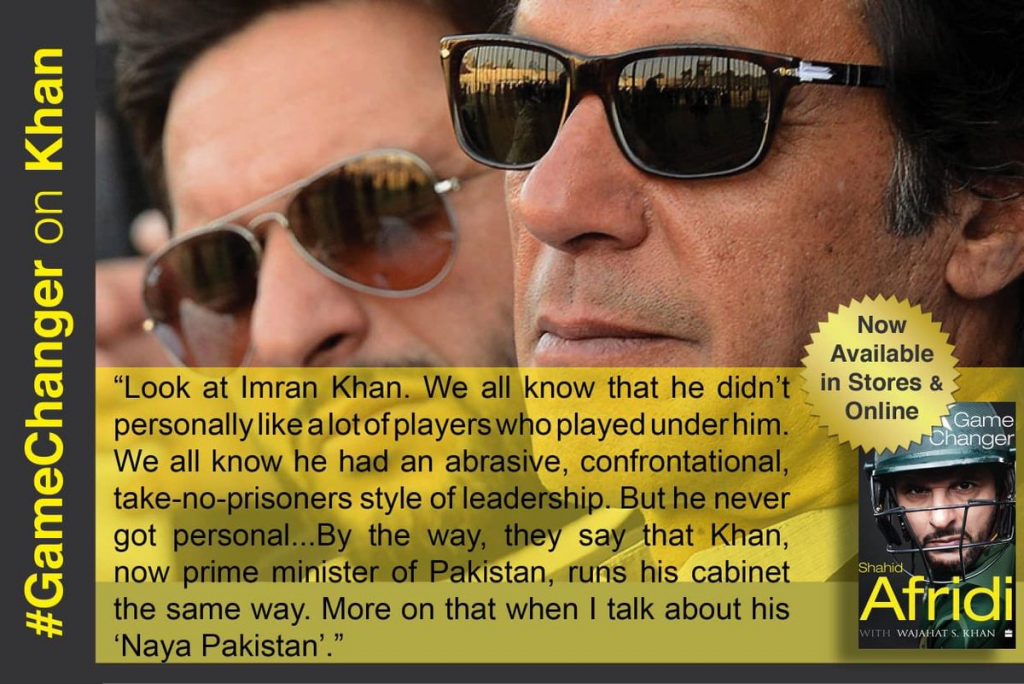 Afridi recalls the famous 1999 tour of India, in particular, the “lows” of the tour, which relates to Pakistan dressing room. He said that everyone in the team knew that Javed Miandad (coach) didn’t want him in the side. The tussle had started even before the series kicked off. 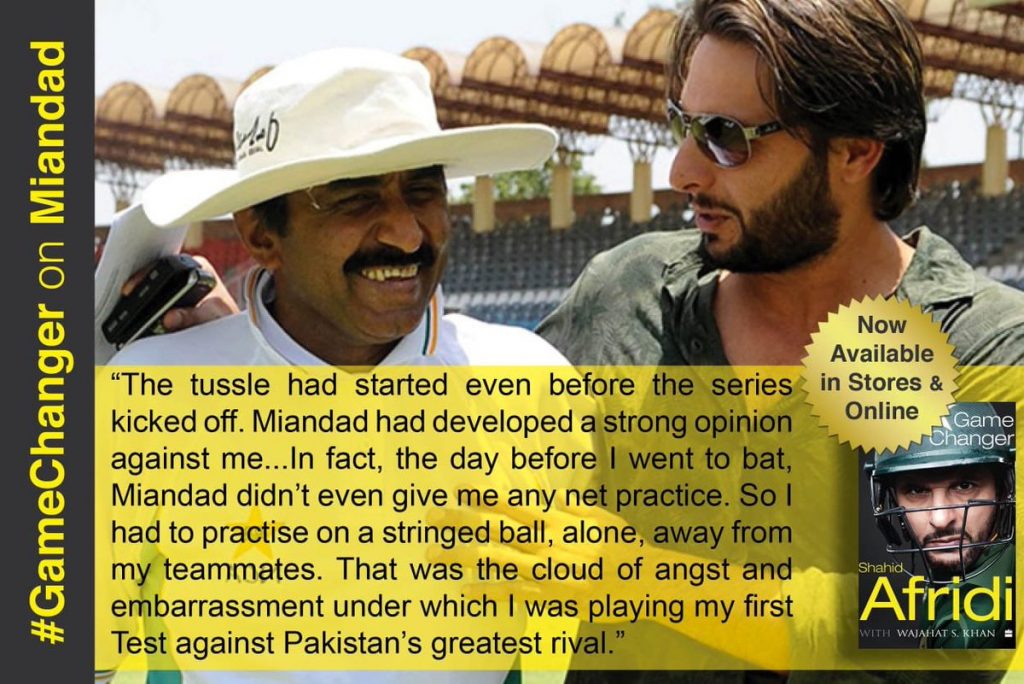 Javed Miandad didn’t give Afridi batting practice ahead of his first test match. The book declares that the legendary Pakistani Cricketer Javed  Miandad is a great player but a small man. 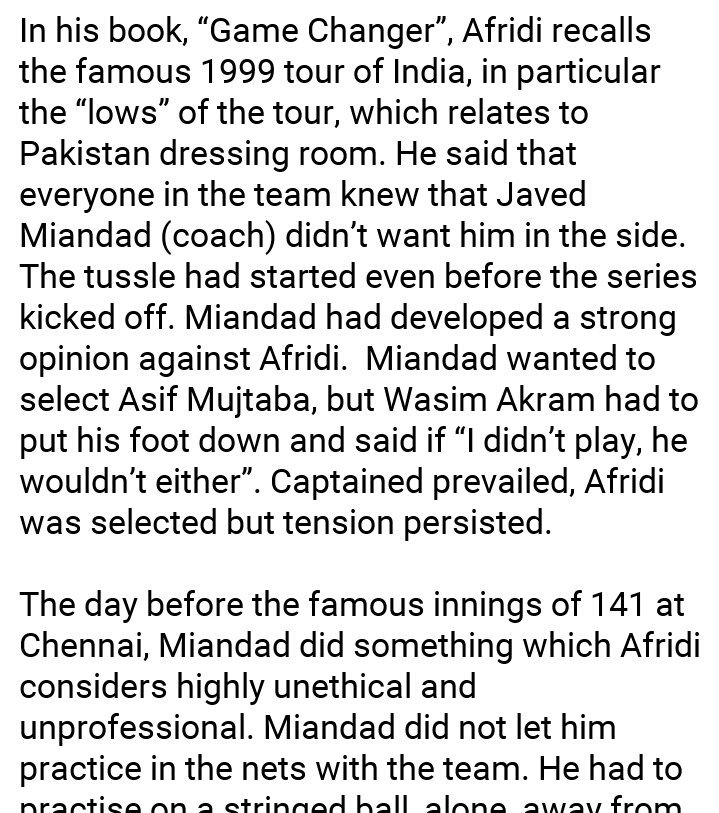 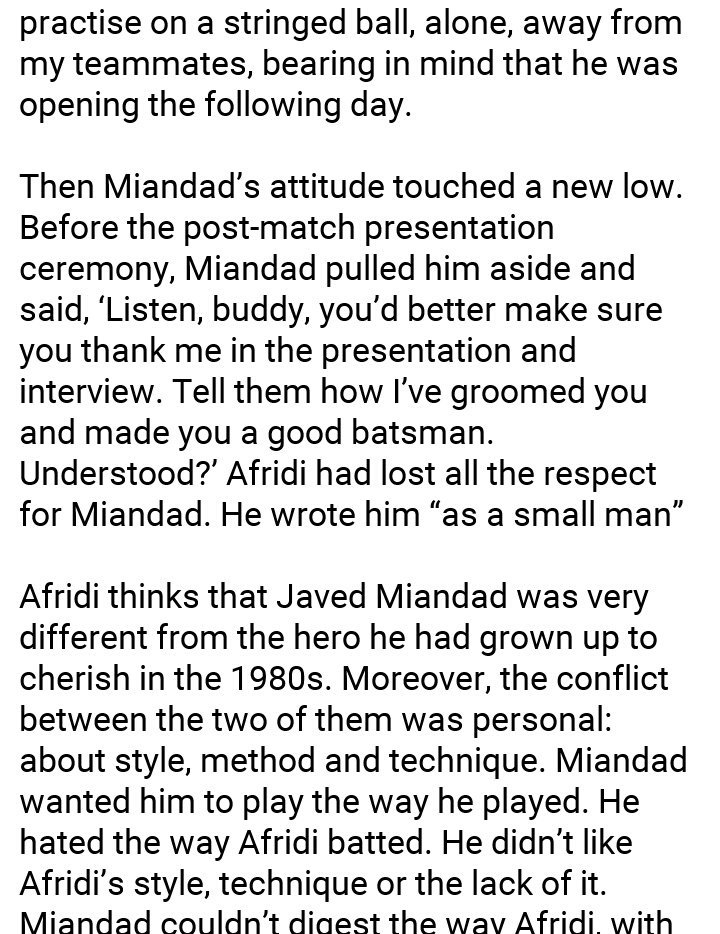 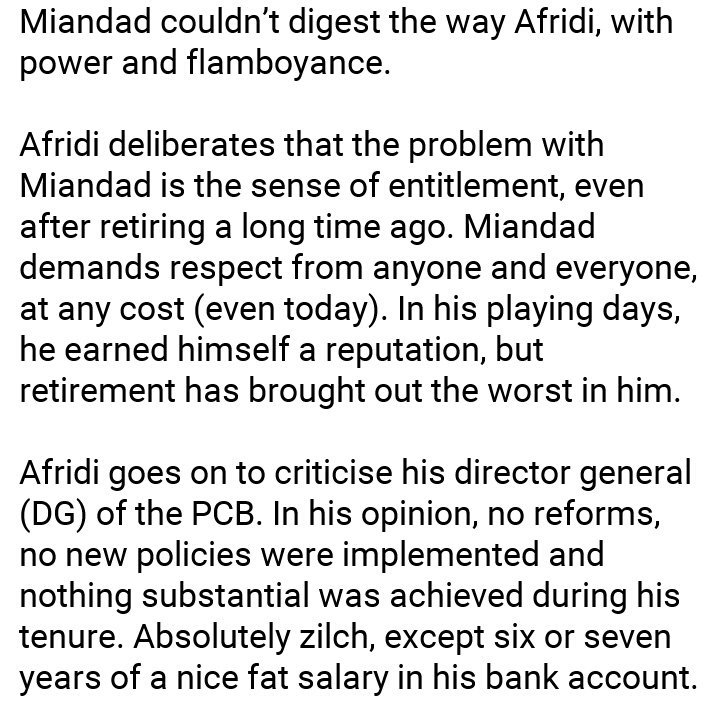 On his animosity with Aamir Sohail, the biography says Aamir Sohail was the first teammate to bond with Afridi on arrival at Nairobi in 1996. Afridi recalls a sad tale on the field, surrounding great innings. He was opening for Pakistan against India in the Sahara Cup at Toronto.

Saeed Anwar didn’t last long, and he was joined in the middle by the captain, Aamer Sohail. Afridi started with a six on the first ball and followed it up with two or three fours.

The crowd went crazy. As the Indian bowler went to his captain to get some advice, Aamir approached him halfway on the track, for it looked like he wanted to discuss something. As soon as Aamir came near enough, he cussed at Afridi and said: ‘I know you’ve fixed this match with Wasim Akram. I know what you’re up to, Afridi.’

Afridi burst into tears in the middle of that pitch, with the game underway. But recovered quickly, went back to the crease, composed himself and tried to focus. He eventually succeeded by scoring a century. Later, when he returned to the dressing room,

Aamir came up to him and said, ‘Stay on my side. Join me. I will connect you with the right people. I can help you run Pakistan cricket.’ Afridi just glared at him and walked away. Later, he told Wasim Akram and Inzimam about the incident.

They told him to keep the episode to himself and handle the situation gracefully and silently (Aamer was the captain, after all). Afridi wasn’t sure where his insecurity came from, although he has a rough idea: it’s about fame, or the lack of it, particularly in his case.

Shahid Afridi, as his fans call him boom boom Afridi for hitting sixes, picking wickets, taking catches on the field has managed to do the same with his biography? There is a lot more to read, grab yourself a copy to find out. 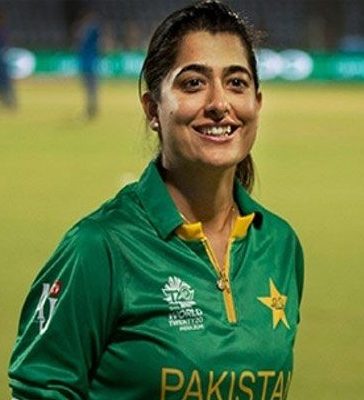 Can Pakistan Maximise their Bowling Resources?