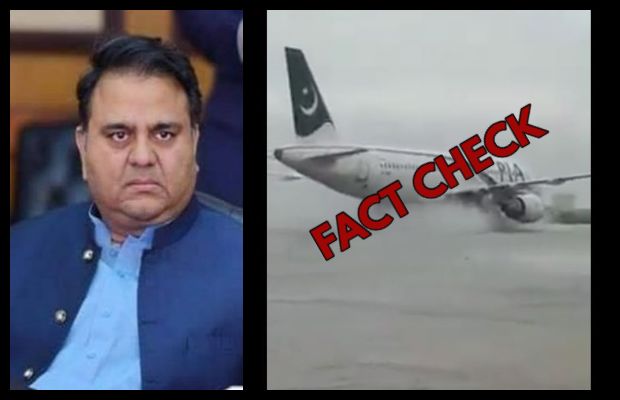 It was the other day when the PTI leader Fawad Chaudhry mocked PPP for its performance in Sindh after heave monsoon rains leashed Karachi.

However, the video he shared in a tweet showing a PIA plane landing on an inundated Karachi Airport runway, turns out to be three years old!

“And PPP wants to rule Pakistan:) 14 years of uninterrupted rule in Sindh has drowned the whole Sindh and Zardaris now want the whole Pak to implement the great Governance model of the NawabShah family,” he said.

At first, people believed it to be the recent case of Karachi rain, however, a fact check has refuted the news.

“An old video is being flushed around on social media that shows an airplane moving on a runway covered in water,” CAA said.

“Please note that this is an old video, nearly 3 years old, and does not depict the present situation at Karachi’s JIAP (Jinnah International Airport), which is normal, with drains working normally,” the CAA confirmed.

Social media has been laden with hundreds of videos, live updates, memes as well as some misinformation regarding the current monsoon rains in Karachi.

The same10-second clip showing the Karachi Airport situation in rain was run on several television channels and social media accounts across Instagram and Facebook.

However, that was not the case.

According to officials, all the drains were working at normal capacity at the Karachi airport.

The investigation into to matter also turned down the false accusations.

Karachi airport and runway were actually operational on July 11 despite heavy rains in the city.

While some flights were reported to be delayed amid bad weather conditions.

tweet
Share on FacebookShare on TwitterShare on PinterestShare on Reddit
Saman SiddiquiJuly 12, 2022
the authorSaman Siddiqui
Saman Siddiqui, A freelance journalist with a Master’s Degree in Mass Communication and MS in Peace and Conflict Studies. Associated with the media industry since 2006. Experience in various capacities including Program Host, Researcher, News Producer, Documentary Making, Voice Over, Content Writing Copy Editing, and Blogging, and currently associated with OyeYeah since 2018, working as an Editor.
All posts bySaman Siddiqui