Political differences apart, whoever is propagating such false news about the most sacred place for the Muslims must be punished severely. 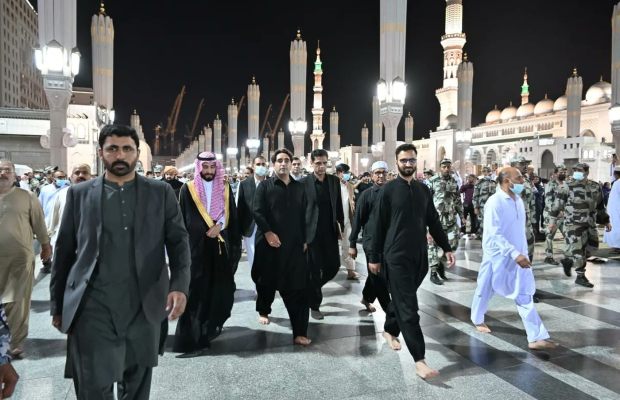 Jiye Bhutto slogans were not raised at Masjid e Nabvi during the PPP chairman and the newly appointed Foreign Minister Bilawal Bhutto Zardari’s visit to the holy mosque.

Beware of the fake news and videos!

A fabricated video is being circulated on social media.

It shows Jiye Bhutto’s slogans were raised as Bilawal Bhutto Zardari entered the holy mosques to pay his respects to the Holy Prophet PBUH.

An unidentified man can be seen making the particular video that was later fabricated.

Political differences apart, whoever is propagating such false news about the most sacred place for the Muslims must be punished severely.

It is pertinent to mention here that Saudi officials on Friday confirmed taking 5 Pakistanis into custody over Thurdsday’s incident at the Prophet’s Mosque in Madina.

According to the spokesman of Madinah Munawara police, 5 Pakistani nationals have been arrested from the premises of Masjid-e-Nabawi on the charge of using obscene language.

The spokesman said that the detainees used insulting words against the Pakistani woman and her accomplices and the arrested persons are accused of desecrating the holy place.

According to police, the detainees are accused of disturbing the security and worship of pilgrims and worshipers and legal action will be taken against the accused.

It is to be noted that an unfortunate incident took place in the presence of federal ministers in Masjid-e-Nabawi PBUM on Thursday,  where some people chanted slogans of thieves and Maryam Aurangzeb was abused.