Faisalabad stripping incident- the other side of story

The matter had surfaced when a video of the four women went viral on social media. 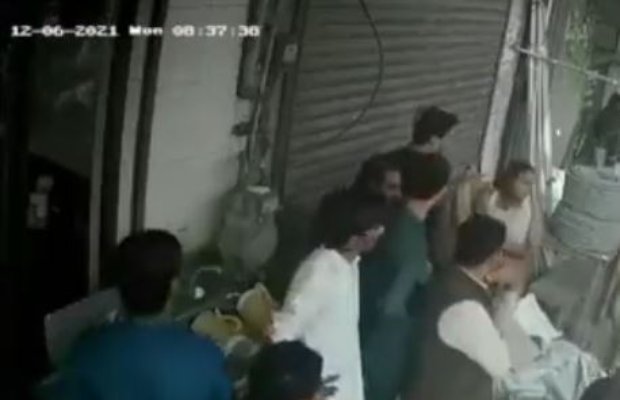 Faisalabad’s stripping incident that left the nation in shock, has another side of the story!

Though the police have arrested five men on charges of assaulting, stripping, and filming four women in Faisalabad’s Bawa Chak Market on Monday.

But the CCTV cameras footage from the location has disclosed a few horrific details.

On Tuesday reports emerged that scavenger women were stripped naked, beaten, and filmed in Faisalabad on allegations of theft.

While the videos taken from mobile phones and CCTV cameras went viral on the internet.

However, the newly emerged video describes a new scene.

The CCTV video clip now viral on various social media platforms show four women entering an electronics store and hiding coils of wire under their clothes. As they try to leave, the shopkeeper confronts them and tries to lock them inside the shop.

However, the women force their way out of the shop, but the shop owner gets hold of one of them, while another woman tries to wrest her free.

However, all of a sudden, the two women on their own took off their clothes by themselves on the street in an attempt to save the two women locked inside the shop.

Another woman can be seen coming running from across the street, who tries to save the caught woman.

The CCTV footage showed how one of the women takes her clothes off on the street.

While the videos doing rounds earlier had depicted another story. According to the locals, the women are thieves,  ganged up to harass the shopkeeper after getting caught stealing.

According to Punjab Police, two of the suspects (Shopkeepers) were arrested on Monday night and three others were arrested later on Tuesday.

“All aspects of the incident are being investigated,” the tweet said.

Following the incident, the first information report (FIR) was registered at Millat Town police station naming four named suspects — Saddam, the owner of Usman Electric Store, and his employee, Faisal, Zaheer Anwar, and Faqeer Hussain, the owner of a sanitary products’ shop — and 10 unidentified suspects on behalf of one of the victims.

On the other hand, Punjab Women Protection Authority’ Chairperson Fatima Chadher in inquiring into the incident and arrived in Faisalabad upon the directives from Chief Minister Usman Buzdar.

She said that one of the women has admitted to tearing off her clothes.

“We are taking up the case because of the inhumane treatment meted out to these women,” she said.

tweet
Share on FacebookShare on TwitterShare on PinterestShare on Reddit
Saman SiddiquiDecember 9, 2021
the authorSaman Siddiqui
Saman Siddiqui, A freelance journalist with a Master’s Degree in Mass Communication and MS in Peace and Conflict Studies. Associated with the media industry since 2006. Experience in various capacities including Program Host, Researcher, News Producer, Documentary Making, Voice Over, Content Writing Copy Editing, and Blogging, and currently associated with OyeYeah since 2018, working as an Editor.
All posts bySaman Siddiqui