Between 10 and 20 protesters were arrested late Friday and "have all been released," police spokesman Patric Fors told AFP. 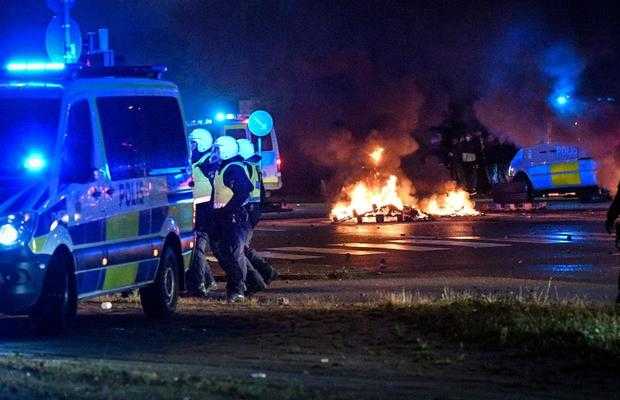 Riots erupted in the southern Swedish city of Malmö after far-right activists burned a copy of the Holy Quran.

The incident has sparked riots and unrest after more than 300 people gathered to protest, police said Saturday.

According to the TT news agency, the violence followed the burning Friday afternoon of the Quran, near a largely migrant neighborhood, that was carried out by far-right activists and filmed and posted online.

According to the police, Anti-Muslim Danish politician Rasmus Paludan was expected to attend that rally but was stopped by the police at the Swedish-Danish border and was subsequently banned from entering Sweden for two years.

Reportedly, Paludan was due to travel to Malmo to speak at Friday’s event. But authorities pre-empted his arrival by announcing the ban and briefly detaining him near Malmo.

“We suspect that he was going to break the law in Sweden,” Calle Persson, spokesman for the police in Malmo told AFP.

“There was also a risk that his behaviour … would pose a threat to society.”

However, Paludan later put up a message on Facebook. “Sent back and banned from Sweden for two years. However, rapists and murderers are always welcome!” he wrote.

Earlier in June, Paludan was sentenced to a three-month prison sentence in Denmark over various violations of that country’s hate-speech laws.

The head of the United Nations Alliance of Civilizations expressed “unequivocal condemnation of the burning of the Quran by far-right extremists … as despicable and totally unacceptable,” his spokeswoman said.

Miguel Moratinos called on religious leaders of all faiths to denounce all violence based on religious belief, spokeswoman Nihal Saad said, adding that “such deplorable acts perpetrated by hate-mongers … and other radical groups incite violence and tear apart the fabric of our communities which are an affront to U.N. values and the alliance which works to strengthen inter-cultural and inter-religious dialogue”.

tweet
Share on FacebookShare on TwitterShare on PinterestShare on Reddit
Saman SiddiquiAugust 30, 2020
the authorSaman Siddiqui
Saman Siddiqui, A freelance journalist with a Master’s Degree in Mass Communication and MS in Peace and Conflict Studies. Associated with the media industry since 2006. Experience in various capacities including Program Host, Researcher, News Producer, Documentary Making, Voice Over, Content Writing Copy Editing, and Blogging, and currently associated with OyeYeah since 2018, working as an Editor.
All posts bySaman Siddiqui