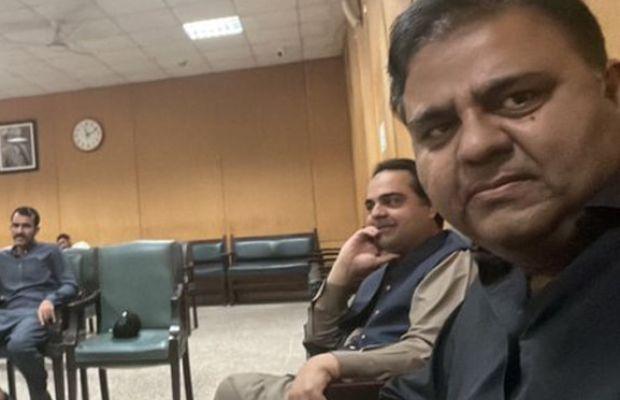 Fawad Chaudhry and his brother get protective bail in the Azadi March rioting case on Saturday.

A case was registered against former information minister Fawad Chaudhry and his brother, Faraz Ahmed for allegedly provoking people against the government and rioting in the jurisdiction of Mangla police in district Jhelum during the PTI’s Azadi March.

The Islamabad High Court (IHC) granted protective bail to the PTI leader and his brother against a surety of Rs5,000 each and the petition was disposed of thereafter.

The case against Chaudhry and Ahmed was registered at Mangla police station in Jhelum, and 150 to 200 others have also been booked in the case.

Both the brothers had filed a petition for their protective bail in the IHC, where Chief Justice Athar Minallah took up their plea today despite it being an off day.

The IHC CJ, in his order, noted that Chaudhry and Ahmed had sought bail in a first information report dated May 25.

The court stated: “Without touching merits of the case and considering the intention to surrender before the court of competent jurisdiction, the petitioners are admitted to protective bail, subject to furnishing surety in the sum of Rs.5,000/- (Rupees Five Thousand Only) with one surety in the like amount (EACH), to the satisfaction of the Deputy Registrar (Judicial) of this Court.”

“The petitioners will be at liberty to deposit cash surety in the light of the policy of this court,” the court order said.

The FIR was registered under Sections 353 (assault or use criminal force to deter a public servant from discharge of his duty), 186 (obstructing a public servant in discharge of public functions), 188 (disobedience to an order duly promulgated by a public servant), 506 (punishment for criminal intimidation), 427 (mischief causing damage to the amount of Rs50), 148 (rioting while armed with a deadly weapon) and 149 (every member of an unlawful assembly guilty of an offense committed in prosecution of a common object) of the Pakistan Penal Code.