"We are all human beings and will react when someone makes such false allegations," he said. 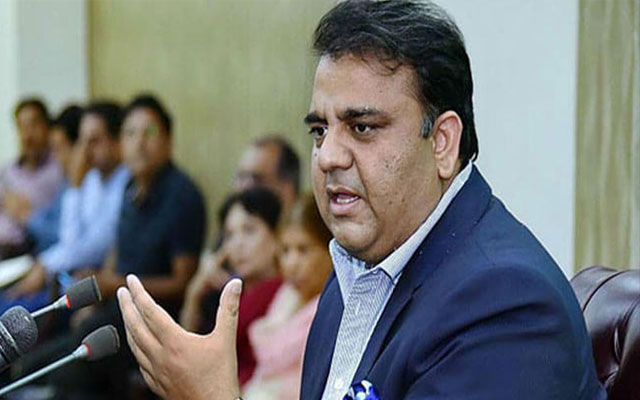 Federal Minister for science and technology, Fawad Chaudhry on the latest spat with anchorperson Mubashir Luqman, responded that he defended his right to slap the anchorperson as he made derogatory remarks about him on his YouTube channel to get clicks.

In a conversation with the host of Geo News show, the federal minister said that his reaction was natural, adding that he is a human being before anything else.

While defending his actions, Fawad Chaudhry further said that he will not tolerate personal attacks against himself.

“We are all human beings and will react when someone makes such false allegations,” he said.

“I have no regrets for hitting Luqman, I do not recognise the principle that one should not hit another person just because they are a federal minister,” he added.

Chaudhry issued the statement hours after he slapped anchorperson Luqman, at an event over allegations of his clandestine relations with Tik Tok star Hareem Shah.

Stressing having no regrets for hitting Lucman, he said he did not recognise the principle that one should not hit another person just because they were a federal minister.

The minister refuted claims he was involved in any way with Hareem Shah as Mubashir Luqman had said while saying that he hadn’t even met the Tik Tok star once in his life.

“Thousands of people meet me every day,” he said. “People click selfies with me. However, I do not know who she is.”

The minister also criticised TV anchor Sami Abrahim along with Luqman by saying they were not journalists.

“Has any journalist body condemned my actions? Did the Punjab Union of Journalists say anything about it? These [Sami Abrahim and Mubashir Luqman] are accidental journalists; they have nothing to do with journalism,” he asserted.

The duo was abusing and exchanging heated words, suddenly, Fawad Chaudhry along with his guard attacked at the anchorperson. He allegedly slapped and even pushed Mubashir Lucman to the ground.

The reception was also attended by the top leaders of Pakistan Tehreek e Insaaf including Jahangir Tareen and Ishaq Khan Khakwani.