Unfortunately, even in 2021, Pakistani politicians don't know better when it comes to unapologetic misogyny 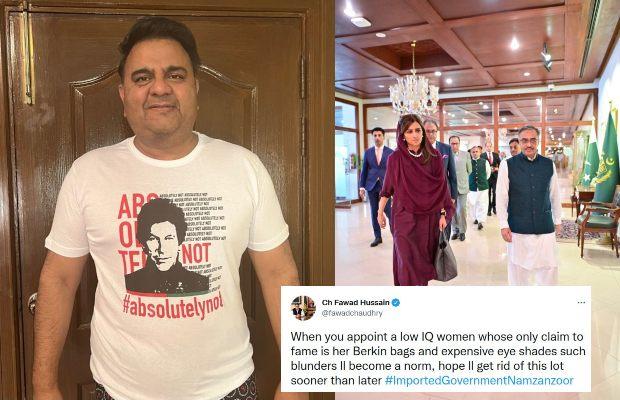 Fawad Chaudhry is being slammed for his misogynist comments targeting Hina Rabbani Khar!

Fawad Chaudhry in a tweet said, “When you appoint low IQ women whose only claim to fame is her Berkin bags and expensive eye shades such blunders to become a norm, hope ll get rid of this lot sooner than later.”

He meant to say Birkin bags!

When you appoint a low IQ women whose only claim to fame is her Berkin bags and expensive eye shades such blunders ll become a norm, hope ll get rid of this lot sooner than later #ImportedGovernmentNamzanzoor pic.twitter.com/KCCkloO9kX

It is terrible to see so many misogynistic remarks against her – when will we change?

Why are women judged on the basis of the clothes they wear and the bags they carry?

Fawad Chaudry’s comments have earned him a lot of flack from social media users including his own party’s supporters.

Why are women judged on the basis of clothes they wear and bags they carry?! Why can’t they be judged on competence and diligence?! Hina Rabbani is an extremely talented person who has out shown several experienced people of her field in the past. This tweet is in bad taste. https://t.co/ox7su6C4AL

As a PTI voter, want to say such comments are unbecoming. She is a thorough professional who’s ‘claim to fame’ has been hard work, building a successful business, raising kids & empowering others. Not liking her in power is 1 thing but ridiculing her personally is quite another.

His party literally awarded a ministery to Zartaj Gul Wazir who was publicly saying things like Covid has 19 varieties and we got more rainfall because of Imran Khan but let’s attack Hina for being ‘low IQ’. https://t.co/fTMUTyHYY4

Mr Fawad this was below the belt. That lady did the very best she could. Defending Zardari is not an easy job. She might be many things but what she is not is a low IQ lady. We might disagree with her but she was excellent at replying under pressure.#امپورٹڈ_حکومت_نامنظور https://t.co/xlCx79fkcr

I’m not a PPP supporter but Hima is one of the most competent foreign ministers Pakistan ever had (way better than SMQ who sabotaged pak foreign policy for pooltical gains) .. such a misogynistic cheap comment https://t.co/se3oHNa5vl

That's how they target women in Paki politics.
Wonder what do her Berkin bags and eye shades have do with anything ! https://t.co/EFSmdPaJLY

By the way Fawad, here’s a Berkin Bag for you: https://t.co/uB4C4erFho pic.twitter.com/u7VZ4i6pqB

It is saddening to see such comments from a Pakistani politician when even, Hina Rabbani is being praised from across the border.

Hina Rabbani Khar is back as Pakistan's Foreign Minister. Terrible to see so many misogynistic remarks against her – when will South Asia change? I have been in a couple of panels with her discussing South Asian geopolitics. She is brilliant.

We Indian Demands Hina Rabbani Khar as external affairs Minister of Pakistan. She will be a good Foreign Minister as she has experience for this post. @HinaRKhar pic.twitter.com/znWth0V58E

This is not the first time the PTI leader is being criticized for his narrow-mindedness and misogynist comments toward female Pakistani politicians.

Earlier PML-N leader Maryam Nawaz has been on his target list.