FIA has revovered objectionable content and WhatsApp numbers from her mobile phone. 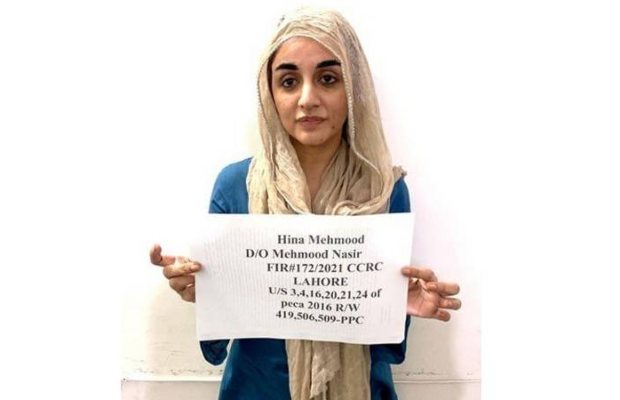 Female hacker arrested in Lahore for releasing obscene videos and pictures of women!

Hina, a hacker girl who released obscene videos and pictures of women in the provincial capital, has been arrested. While objectionable content and WhatsApp numbers have been recovered from her mobile phone.

According to media reports, Hina, a blackmailer who released obscene videos and pictures of women. This female hacker has left behind men who hacked other people’s accounts and shared objectionable photos and videos of women.

An investigation revealed that Hina Mahmood hacked the citizen’s Hotmail, Skype, Instagram, and shared objectionable photos and videos of 2 women on the hacked account.

According to the Federal Investigation Agency (FIA), the investigation also revealed that Hina also made women’s videos viral through 2 WhatsApp numbers and resorted to Virtual Private Network (VPN) for this purpose, which cannot be traced.

According to sources, the FIA traced and arrested the hacker from the mobile data on the complaint of a citizen and a woman, while also obtaining objectionable materials and WhatsApp numbers from the mobile recovered from him.

FIA officials said that citizen IDs were being used to viral videos on the girl’s mobile phone while objectionable material against the petitioners has also been recovered from the mobile phone and action will be taken against the arrested female hacker as per law.